“Don’t try to understand Mexico with reason; you’ll have more luck looking to the absurd—Mexico is the most surrealist country in the world,” surrealism founder André Breton said in 1938, during a visit in Mexico.. Around the time when Breton’s own First Manifesto of Surrealism was released, in 1924, Soviet poet and radical futurist Vladimir Mayakovsky left his revolutionary Russia to see for himself the Mexican uprising and found it just as baffling. After watching the destitution and hardships facing the “proud descendants” of the Aztecs, as well as the heavily armed nature of the revolution, Mayakovsky relinquished any hope of conjoining the local uprising to international Marxism and settled for admiring the country’s landscapes and finding solace in his budding friendship with Diego Rivera, who had turned up to wait for him at the train station and introduced him to fellow poets and intellectuals.

What that mystifying revolution produced was not as much a strict ideology as a process of looking inwards, of turning to the colours and shapes of pastrooted traditions to forge an authentic national identity. And nowhere is that more apparent than in the emergence of Mexican Modernism, a movement so rich in artistic and intellectual production that it still continues to enthral.

That period comes to the fore in MALBA’s monumental exhibition Modern Mexico. Avantgarde and Revolution, which brings together more than 170 works by some 60 artists, including Mexico’s “three greats” Rivera, Siquieros and Orozco, as well as Frida Kahlo, Leonora Carrington and Remedios Varo.

It is a remarkable line-up, showcasing a vastly original and independent visual culture, which rejected newly-adopted European influences in favour of highlighting the true colours of a deeper Mexico, seen in all its ferocity and native lore, with quite a few vivid brush strokes of the macabre and the farcical.

Organised in collaboration with the National Museum of the Arts of Mexico (MUNA L) and a score of institutions and private collections, the new exhibition, which was three years in the making, is curated by the MUNA L’s Sharon Jazzan and Ariadna Patiño Guadarrama, and Victoria Giraudo, from the MALBA. The enormous selection of works is divided into four core modules which take up two floors at the museum: Cosmopolitan Modernity, Social Revolution, Popular Culture and Surrealist Experiences, a theme-based grouping of muralists, stridentists, surrealists and art by female artists.

Rivera’s stunning Zapatista Landscape reigns supreme in the Cosmopolitan Modernism group, a cubist masterpiece built with typical elements of Zapata followers, such as the rifle, serape and straw hat. The Social Revolution space brings the visitors closer to the work of sui generis artist Francisco Goitia, who depicted the violence of the times as well as the indigenous history and culture.

Also in this part of the exhibition are a famous self-portrait by Siqueiros, The Great Colonel (an alias for the muralist artist who rose to the rank of lieutenant colonel while fighting in the Spanish Civil War), and a sketch by Rivera for his controversial mural at the Rockefeller Center.

Stories that caught our eye: June 26 to July 1

Rivera’s seminal Dance in Tehuantepec painting features large in the exhibition. Bought last year by MALBA’s founder Eduardo Costantini for a record figure of US$15.7 million, this piece is the most important work by Rivera held in a private collection outside Mexico.

Other works on display by the Mexican master include the nine- metre wide Juchitan River, a bucolic landscape fully covered with Venetian mosaic, and The Seller of Gannets. Siqueiros’ large-scale Mining Accident, with its politicallycharged depiction of miners reaching out to a fellow worker who is buried in the rubble, is another must-see at the MALBA, as are Orozco’s emblematic Dismembered Man and Head Pierced with Arrows.

Another chief detail of this exhibition: for the first time, the MOMA lent two pieces from its collection to a Latin American institution: Rivera’s drawing Man at the Crossroads and Frida Khalo’s iconic painting Fulang-Chang and I (1937), one of the artist’s most famous self-portraits with her pet spider monkey, shown alongside a framed mirror in which the viewers may see their reflections next to Kahlo’s serene countenance. 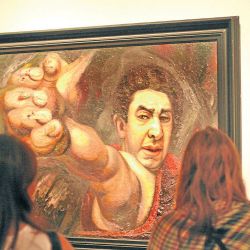 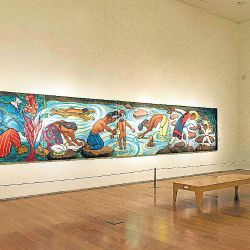