Our cuisine has long been known worldwide for its barbecued beef, but chefs are now taking the country’s passion for grilling with wood to a new level, earning international recognition through experimentation, open-fire ovens and even fast food.

Flames glow, smoke billows and the aroma of slowly burning logs blends with the flavours of lightly charred calamari with broccoli and aioli cooked inside a handmade wood-fired oven. Like other dishes at Proper restaurant, essential ingredients for this house favourite are timber and fire. Proper was recently named in the Latin American edition of the prestigious World’s 50 Best Restaurants list, part of Argentina’s growing international recognition for creative open-flame cooking.

The sacred Argentine asado, or barbeque for those not in the know, brings together families and friends, regardless of social class, and is a source of national pride. While grilling in other countries involves gas or store-bought charcoal, the Argentine way is often more primal — just wood, flames and meat.

“Fire is a very strong part of Argentina’s identity,” said Augusto Mayer, who launched Proper last year in a refurbished auto-repair shop with fellow chef Leo Lanussol. “We have a bunch of ways of cooking with wood and we’re harnessing the potential of that type of cooking.”

Diners stand in long lines every night outside the restaurant in the trendy Palermo neighbourhood, attracted by the scent of the vegetable-centric dishes. From a haricot bean purée with almonds and pumpkin-seed mole to celery with kefir cream, green apples and pecans. The owners take pride in their sourdough bread served with homemade butter and anchovies from the coastal city of Mar del Plata.

“Argentine cooking is going through a very important moment,” Nico Visne, a local food critic and journalist, said as he tried the calamari at a counter near the wood-burning oven. “It’s based on our gaucho (cowboy), indigenous and immigrant cooking — and there’s this return to the real flavours and the fire.” It seems odd to call it a trend since flames are the oldest way of cooking food. And yet a growing number of chefs around the world have elevated wood-fire cooking to new heights at some of the most acclaimed restaurants like Spain’s Asador Etxebarri in the Basque countryside.

In Argentina, the precursor of this movement is Francis Mallmann. The country’s most famous chef and owner of three restaurants began his career cooking French food. At some point, he returned to the elemental ways of cooking that he knew growing up in his native Patagonia region. Many Argentines grew up watching Mallmann’s cooking shows on TV in the 1980s, long before he entranced audiences worldwide with his grilling methods in the Netflix docu-series Chef’s Table. “He said it was all right for Argentine chefs to cook the way that Argentines do, not just the way that the French do or the Italians do, and I think that resonated with a couple of generations of Argentine chefs,” said Peter Kaminsky, a food critic and co-author with Mallmann of Seven Fires: Grilling The Argentine Way.

Spotlight on diversity, LatAm and Nazi past at 70th Berlinale

Logs pile to the ceiling in the courtyard of Bestia restaurant, which recently opened in the outskirts of Buenos Aires. Its co-owner, chef Nacho Trotta, travelled for weeks through Alabama, Louisiana and Texas to incorporate smoking and grilling methods of US Southern cuisine into tender ribs and others dishes that he slowly cooks for more than 10 hours. “Firewood is the engine of this restaurant,” he said. “You can’t get this type flavour from a gas grill or a frying pan.” The wood-fuelled fusion is also key at Fayer (fire in Yiddish), a restaurant that blends Argentine open-fire grilling with Jewish cuisine.

Even fast food has been influenced by the logs. At Kon Kon, a huge mural of a bearded lumberjack greets people who come for shawarmas cooked with embers instead of the traditional rotisserie. “I see so many North American young chefs going to Argentina to learn how to cook that way,” Kaminsky said. “Argentina has become a magnet for people who want to learn how to cook with fire.” 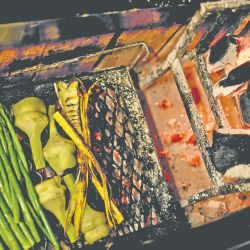 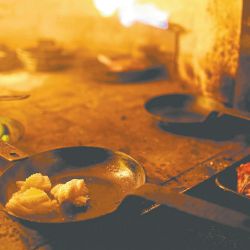 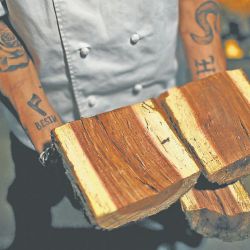 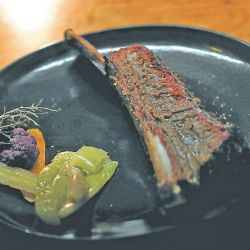