Even though the Parque Centenario Amphitheatre is prepared to house different shows, FIBA has been usually opened in more traditional spaces, such as Teatro San Martín. Last Wednesday, however, attendees were able to watch the play in the open air, in the middle of an enormous park, during an evening of pleasant weather.

The opening performance was therefore consistent with the goal of this summer’s edition of FIBA, which promotes performances in diverse stagings – besides traditional theatres, activities are also being held in the streets, on rooftops, bars, shop windows, subway stations or real apartments.

The title of the piece performed by Robbins’ company, and some of its lines, come from a sonnet by Emma Lazarus written in 1883 to raise funds for the construction of a pedestal for the Statue of Liberty (later, the poem was mounted inside the same pedestal). In this work, this mighty woman is defined as the Mother of Exiles, and Robbins’ production deals indeed with the issue of migrants and refugees throughout the last 300 years.

The play tells the stories of 11 people from different countries, who are all the parents or grandparents or grand-grandparents of the actors and actresses of the company. The actors pay homage to them, recreating onstage their real struggles prior to their arrival in the United States, in a sort of testimonial or a work of documentary theatre.

The message of the play, which encourages openness to immigrants, was strengthened by Robbins himself who, after the performance, talked to the members of the audience and asked about the origin of their own ancestors – inevitably, the answers offered in Buenos Aires exposed the depth of local diversity, with the population here the result of different waves of immigrants arriving (including the most recent one from Venezuela).

Whereas the amphitheatre housed more than 1,600 people on FIBA’s opening night, in contrast the second production presented within the international programme, The Cliffs of V. (Les falaises de V., France), was designed only for around 10 viewers. Yet thanks to the work's short length, performances were repeated several times a night last Thursday and Friday at El Cubo Theatre, so as to reach a bigger audience.

Directed by Laurent Bazin, The Cliffs of V. is one of the first French narrative experiences to mix live acting and virtual reality. Set in a world straight out of science fiction, reminiscent of the famous Black Mirror TV series, in the play prisoners on long sentences are offered reduced time in exchange for a part of their body, due to an organ shortage crisis. Wearing a VR headset, the viewers are invited to share the life of one of those prisoners, who is about to trade his eyes for years of freedom. No time is wasted – spectators are immediately introduced into the atmosphere while they are led by nurses to prison hospital beds, where the prisoners are prepared for an imminent operation. Each bed is, in fact, the “theatre seat,” and pillows work as backrests.

Once there, spectators have to put on the headset, through which they are transported into the world of the prisoner, from a subjective camera angle. It is really quite chilling, how one turns into the character. You watch the hands of the prisoner as if they were your own (like in those video games that simulate a prolongation of our body). Other characters get nearer, close to one's range of sight in such a realistic way that it could make you shiver, even though the actors are performing on video. And as the watchers turn their head to the right or to the left and up and down, the whole space of the fictional room unfolds before their eyes; with this 360-degree landscape, in which the whole body is virtually immersed, the spectators really feel they are the protagonists of the story, though they do not know what is going to happen next. And that is what makes this experience so exciting.

The Cliffs of V. – the title alludes to the cliffs of Varengeville-sur-Mer in Normandy, the last image the prisoner chooses to see before donating his eyes – is a very attractive work, reflecting on the sense of sight and how determinant is in our lives. Paradoxically, this story about becoming blind requires an intense use of the eyes, so it is quite shocking when the viewer is left in total darkness at the end of the performance. It is ironic how this production, which takes the concept of theatre to its limits – relying on technical audiovisual resources and not so much on live bodies performing a story – involves the sensations and orientation of a spectator’s body in such a strong manner.

It is also worth highlighting that, although it belongs to the international program, The Cliffs of V. was offered for free to the public, because it was part of Abasto Marathon, a new section of FIBA that invites the entire community of this neighbourhood to participate in activities (mostly by local creators) for free (theatre, music, dance and visual arts and even films) and for all tastes, both in and outdoors.

It also must be said that it is the first time a show from the Festival Off d’Avignon is presented here in Buenos Aires. It was certainly an innovative and stimulating bet scheduled for the first days of the Festival. 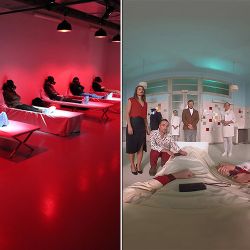 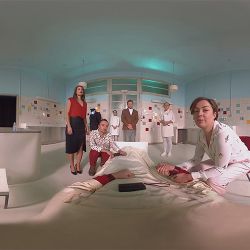 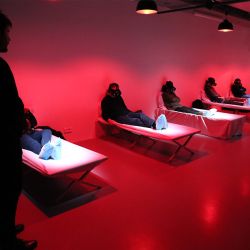