Two hours south of Santiago, as I leave the motorway, trucks with bins of grapes slow the traffic on the two-lane road toward the town of Santa Cruz, in Chile’s Colchagua valley. With the warm dry March weather, it feels like September in the Napa Valley, in my home state of California. This, though, is more than a day trip from my house, so I’ll spend several days sampling the wines and dining in the country’s premier wine district, before a quick escape to its Mediterranean coastline.

Tourist-friendly Colchagua is due to host next year’s Congreso Mundial de Enoturismo (World Wine Tourism Conference). My own first stop is the Danish-Chilean Hotel TerraViña, nearly surrounded by vineyards on the outskirts of town, where I’ve stayed on previous trips. From here, it’s a short stroll through the vines to Viña Laura Hartwig, which now offers carriage rides through its grounds and new tasting facilities for an expanded wine list. They’re part of the Movimiento de Viñateros Independientes (MOVI), a loose alliance of smaller wineries with an increasingly high profile. I sample a Cabernet, a Merlot and a blend, accompanied by a plate of almonds, cheese, cold cuts and crackers.

The next morning, I move across town to the Hotel Casa de Campo, where the only drawback to my cool and spacious room is its relative proximity to the highway. Fortunately, its French doors open onto a sprawling lawn with view of the Chilean coast range, though I’m a bit shocked to see the flood-style irrigation in an area where water is at premium. I’m pleasantly surprised, though, when a gardener knocks on my door to offer a bowl of freshly picked prunes.

From there, I head to Santa Cruz’s walkable downtown, with a lushly landscaped Plaza de Armas surrounded by low-slung buildings and a parish church that was totally rebuilt — on its original design — after a major earthquake in 2010 forced its demolition. On this visit I skipped the imposing Museo Colchagua, created by Iran-Contra arms merchant Carlos Cardoen, whose foundation also financed the church’s reconstruction, but its natural history displays are well worth seeing.

That afternoon, I eat on the patio at Casa Colchagua, a renovated adobe just a stone’s throw from TerraViña. Rather than bread, the appetiser is a sopaipilla enhanced by the savoury tomato-onion-garlic salsa known as pebre, plus a pisco sour with a touch of ají verde for an aperitif. For the main course, there’s quinotto with shrimp, scallops and squid rings — Chile’s diverse seafood is world-class — and a nice glass of Sauvignon Blanc.

In the afternoon, I drive to the village of El Peral to visit OWM Wines, a low-tech operation that produces only blends and does much of the work manually, while bodega itself is a tiny adobe within a far larger garage full of heavy machinery. With a minimum of two guests (maximum of eight), winemaker José Antonio Bravo does the tours himself, and encourages guests to make their own blends. Later, back in Santa Cruz, I dine at Vino Bello — an established Italian option — for a seafood risotto.

The next evening, after an unseasonably rainy day, I meet British photographer Matt Wilson and his wife Andrea—a winemaker at Clos Apalta—for dinner at their house near the Viu Manent winery. We chat about travel writing, photography and the madness of Brexit, among other topics, and enjoy several glasses of Apalta’s wines (Apalta is not a MOVI member). The following morning, I moved to the westerly site of Clos Santa Ana, where Italian winemaker, art collector and dog fancier Luiz Allegretti invites me to a long Sunday lunch with his neighbours — one of whom is also a winemaker — and to spend the night in his sprawling colonial home, with its multiple interior patios. That’s a privilege, but Allegretti also has a tasting room for the general public—I’ve taken taken a liking to Carmenere, the rough equivalent to Argentina’s Malbec in the sense that it’s virtually exclusive to Chile.

The next morning, I drive west through the coast range toward the beach town of Pichilemu, passing a large roadside shrine to the Difunta Correa (do Argentine surfers leave bottled water for San Juan’s legendary folk saint?). Once a playground for the rich — its renovated cultural centre was a casino built by the Anglo-Chilean Agustín Ross, whose name also graces the handsome waterfront park — downtown “Pichi” is seeing signs of rejuvenation.

Still, most of the action takes place a few kilometers south at Punta de Lobos, which attracts a cosmopolitan surf crowd comparable to what comes to Northern California during the famous Mavericks competition. Sacred to surfers, the point of the peninsula here is now a protected reserve under the aegis of the Fundación Punta de Lobos.

There, the budget crowd stays at La Sirena Insolente, the newest member of a small hostel chain that has comfy private rooms as well as dorms. At the other end, I stay at the luxury surf lodge Hotel Alaia, at a spacious room with ocean views and a private deck, not to mention its skateboard park, climbing wall, beach bar, a freshwater pool, and surfing lessons. I don’t ride the waves — at Punta de Lobos there are small memorials to surfers who’ve died there — but I walk the shoreline and dine in its stylish and sophisticated restaurant, primarily using locally sourced ingredients.

At Punta de Lobos, there’s also a cluster of food trucks with some unexpected treats such as a Peruvian burrito, perhaps the ultimate in fusion cuisine. Unfortunately, when I arrive around noon the following day, the Peruvian’s not yet open, and I need to return to Santiago. That burrito will have to wait. 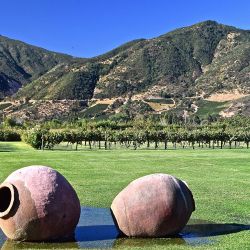 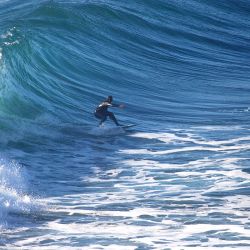 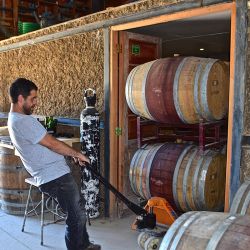