The Platinum Jubilee of Queen Elisabeth II was celebrated in style on Thursday evening at the British Embassy residence with over 800 guests from many walks of life. Running through a reign spanning 14 prime ministers from Winston Churchill to Boris Johnson and seven Popes and a life including all the World Cups ever played, the new British Ambassador Kirsty Hayes listed various areas of bilateral cooperation with Argentina (including vaccines against the coronavirus pandemic) before dedicating some words to the pebble in the shoe – the 40th anniversary of the outbreak of the South Atlantic war at the other end of this month – mentioning the presence of families of the 1982 war dead. The Glasgow COP26 climate change summit in her native Scotland was also highlighted (the Embassy took pride in hosting a carbon-neutral reception) and the envoy further confided to her large audience that she was taking polo classes before giving way to the Mr Kite group with their rendition of Beatles songs.

The “blue” parallel dollar had a bumpy week, shooting up eight pesos last Tuesday and then shedding seven of them the next day, before closing the week yesterday on the round number of 200 pesos from 203 pesos the previous Friday. Observing this downward trend, the official exchange rate inched up from 119.50 to 119.75 pesos, as quoted by Banco Nación, or 197.16 pesos if the 65 percent surcharges for savers and tourists are included. The parallel but legal CCL (contado con liquidación) and MEP (medio electrónico de pago) were both around 206 pesos, barely moving from last week. Country risk was sharply up at 1,789 points yesterday from 1,730 points the previous Friday.

Juntos por el Cambio politicians headed by deputy Waldo Wolff have taken Morón Frente de Todos Mayor Lucas Ghi to court over a controversial flyer urging youthful drug consumers to go easy, accusing him of "instigating the commission of a crime" even though the opposition coalition’s own councillors joined in the unanimous approval of the flyer. The latter claimed that they had approved the principle of “damage limitation” rather than the actual content of the material. Ghi argued against a "hypocritical or moralistic" discourse when drugs were undeniably present, whether legal or not. The ARDA (Asociación de Reducción de Daños de la Argentina) organisation took full responsibility for the campaign, describing "prohibitionism as conservative and obsolete."

Vice-President Cristina Fernández de Kirchner last Tuesday hosted four-star United States General Laura Richardson, the first female commander of the Southern Command, with “the important role of women in maintaining peace and security in the region” uppermost in their conversation. The new US Ambassador Marc Stanley was also present. General Richardson had previously met with Defence Minister Jorge Taiana at a working meeting to discuss bilateral cooperation in military training and equipment.

TOGETHER (BUT NOT WITH MILEI)

Friction lurked below the surface in the Juntos por el Cambio opposition coalition with a tense meeting of top brass last Thursday ruling out alliance with libertarian leader Javier Milei (a statement subsequently disowned by PRO chair Patricia Bullrich) and including an unconvincing reconciliation with Jujuy Radical Governor Gerardo Morales over his talks with Congress Speaker Sergio Massa while earlier in the week Civic Coalition Elisa Carrió weighed into ex-president Mauricio Macri over his recent photo with former United States president Donald Trump as “disgraceful,” saying that only Milei, Russia’s Vladimir Putin and very few others would want such a photo.

Sir Alan Duncan, 65, Foreign Office minister for Europe and the Americas in the 2016-19 Theresa May government, has affirmed in his memoirs that then Deputy Foreign Minister Carlos Foradori was "so drunk" when both were signing a Malvinas agreement in 2016 that "he could not remember all the details." In his book In the Thick of It (as anticipated by the DeclassifiedUK website), Duncan (ostensibly here for a business forum in September, 2016) met up with the then-brand-new British Ambassador Mark Kent and discovered under his residence “a fabulous, well-lit wine cellar lined with bottles of Merlot," which he considered the perfect venue for the "delicate" negotiations with Foradori regarding extra flights to the Malvinas and other areas of Anglo-Argentine co-operation. Between one bottle and the next, Duncan recalled, "the negotiations improved and around 2am we shook hands on a general agreement." The next day, the British plenipotentiary continued, Mark Kent told him that Foradori had just rung him up to say that he was so drunk the night before that he could not remember all the details," while "like a true Brit, Mark faithfully remembered what had been agreed without frills." At the investment forum Duncan met then President Mauricio Macri, "who gave his blessing to our efforts.” A more sober encounter with then-foreign minister Susana Malcorra produced moments when it seemed an agreement would not be reached but Duncan came away with "the first positive joint statement since 1999, covering trade, security and new flights to the Malvinas, a truly historic agreement." But Foradori dismissed this account as "a complete fantasy," explaining that the joint communiqué was far too long to have been written in a single night and that the Foreign Ministry’s process of authorisation was multi-tier, the more so with such a sensitive issue as the Malvinas. Belonging to the Radical wing of the Juntos por el Cambio coalition, Foradori has been assigned no diplomatic mission since but continues to draw a monthly salary of 800,000 pesos. Last Tuesday Foreign Minister Santiago Cafiero ordered an internal investigation to determine whether in fact Foradori was drunk during Malvinas negotiations with Britain and thus guilty of malfeasance.

Robert Cox, the 1969-1979 editor of the now extinct Buenos Aires Herald and occasional Times columnist, will be one of the three journalists awarded the Pluma de Honor prize by the National Academy of Journalism come Journalist’s Day (June 7) in the first such ceremony since 2019 due to the coronavirus pandemic. The prize was awarded for his valour in denouncing human rights violations during the 1976-1983 military dictatorship. Elisabetta Piqué (a La Nación foreign correspondent and perhaps a predictable choice, given the seven weeks she has been spending on the front line in Ukraine) and Daniel Enz (an investigative reporter whose work helped nail the former Entre Ríos governor Sergio Urribarri for corruption, among other things) will be the other recipients.

Speaking alongside Health Minister Carla Vizzotti at Laura Bonaparte Hospital, President Alberto Fernández announced last Monday that Argentina would be doubling its mental health budget to upgrade the training of professionals and boost job and housing opportunities for patients. Underlining that the pandemic had greatly increased stress levels among over half the population and the suicide rate among the young especially, President Fernández told a public hospital audience that the mental health budget will be boosted by four billion pesos, passing from 3.7 billion pesos (US$31 million) to almost 7.7 billion (US$64.7 million). Community mental health programmes and increasing the number of outpatients will be central features of this initiative.

State-run Jujuy company Cannava has begun preparing for the harvest of 35 hectares of medicinal cannabis, the largest plantation of its type in Latin America, in a project launched by Jujuy Radical Governor Gerardo Morales himself last Monday, accompanied by his son Gastón, the CEO of Cannava. Speaking to reporters, Governor Morales said that Jujuy has “no ceiling for the development” of cannabis.

THE WEEK IN CORONAVIRUS

The above slug (appearing unfailingly on this page for over three years) has this month been adopted by the national health authorities in the sense of switching the announcement of Covid-19 data from a daily to a weekly basis. Last weekend the Health Ministry reported 11,307 cases of coronavirus contagion and 198 deaths over the last seven days with only 372 patients in intensive care, well below peak levels but still representing a 25 percent uptick in cases. The totals for the last 37 months thus reach 9,072,230 people infected with a death toll of 128,542 (over half or 59,965 in Buenos Aires Province while 11 provinces reported no deaths last week). Meanwhile Brazil has officially declared the end of its health emergency. 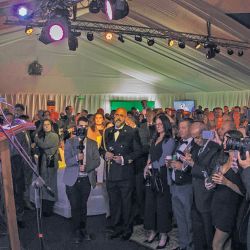 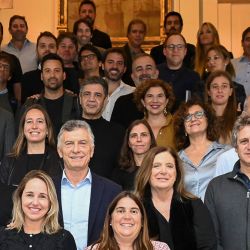