Villa Azul, a low-income neighbourhood in the outskirts of Buenos Aires became the first shantytown in Argentina to be isolated by the authorities, as part of efforts to prevent the spread of Covid-19.

“Today the whole neighbourhood is considered to be in close contact, so the neighbourhood has been surrounded by security forces. Nobody can leave without permission. The State seeks to contain the area as much as possible,” a source within the Buenos Aires Province government said in comments reported by the AFP news agency.

The neighbourhood in question lies about 17 kilometres south of the capital and is home to about 4,000 people, who live in precarious housing. The Buenos Aires Province government reported that 92 new cases of the virus have been confirmed with another 100 under observation.

Fences have been placed at every corner of the neighbourhood to prevent the entry and exit of residents for the next 15 days, covering a perimeter of about 12 hectares. Individuals may only leave with explicit permission.

The immediate aim is to prevent the coronavirus from crossing a nearby highway and spreading to the neighbouring Villa Itatí, where another 16,000 people live in overcrowded conditions.

Villa Azul, which lies between Avellaneda and Quilmes, is one of the 1,800 vulnerable neighbourhoods on the outskirts of Buenos Aires City that have little access to public services. They are home to more than three million people.

In addition, an estimated 350,000 people live in villas inside the capital city itself. The shantytowns located inside the capital have experienced a wave of contagion over the last two weeks which has affected 2,593 people – making up almost half of all cases in the federal capital.

More than 80 percent of the 12,615 nationwide cases confirmed to date are concentrated in Buenos Aires City and Province. A total of 467 fatalities have been recorded, while 3,999 have recuperated. 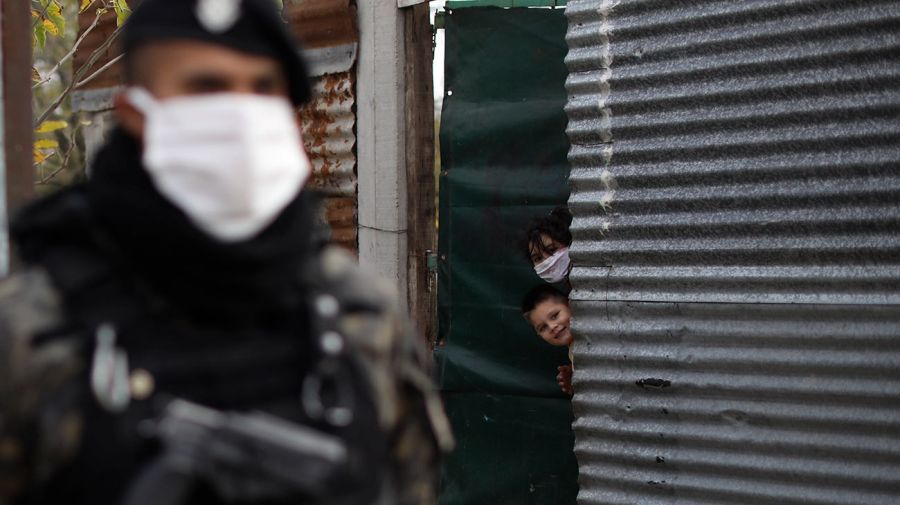 “The main concern is containing the epidemiological epicentre. It is very complicated. It’s uncomfortable for residents, and the anguish of not knowing how this is going to evolve is understandable. The important thing is to maintain some peace of mind,” said Buenos Aires Province Security Minister Sergio Berni, who is in charge of the operative to secure Villa Azul, told the press.

Authorities have vowed to ensure that sufficient food, medicine, and cleaning products are delivered to the neighbourhood, but many residents said they were not confident officials would follow through on that promise.

“Until last week, I was [still] working. But now we can’t even leave. It gives me a sensation like we are prisoners. I have a little money saved but if I can’t go out to get groceries I don’t know how I’m going to eat,” maintains José Sequeira, a 63-year-old mechanic.

For Darío Anso, 24, the lockdown means he is unable to visit his premature baby, who is still in hospital. He says he feels “helpless because [he] cannot leave the neighbourhood, not even to go to the grocery store three blocks away.”

Anso admits that locals have organised football tournaments at a local pitch, known as “la canchita”, which at the far end of the villa. He said that was “the only source of entertainment during the quarantine and before it too” for residents.

Some residents, however, insist that these games are responsible for the new outbreak of the virus.

“They played football all day at la canchita. They share drinks, and then this happens. Men’s and women’s games until midnight. This isolation [period[ is the only way to stop it,” argued Marcos Motta, a 64-year-old builder who says most cases are young people.

The decision to close off the barrio using the security forces has also drawn criticism from organisations in and outside of government.

“You cannot think of a solution to contagions in these neighbourhoods with a checkpoint system,” said Daniel Menéndez, undersecretary for the promotion of the social economy at the Federal Social Development Ministry.

Carolina Brandariz, the director of the El Barrio Cuida el Barrio social organisation, also questioned the effectiveness of the measures.

“It is a delicate decision that was made in agreement with the mayors and the [provincial] security minister [Sergio Berni]. It is not applicable to all neighbourhoods, and it can generate sources of greater conflict,” she says.

Many experts have argued that lockdowns are impractical in marginalised neighbourhoods. In recent weeks, ensuring the safety of residents in the villas has become the main focus for the the government of President Alberto Fernández, who ordered a mandatory nationwide quarantine on March 20 and has extended it ever since, with some provinces with no new cases granted extra freedoms.

The president has said that “there is no precedent [for how to handle the virus in the villas] because in Europe and the United States, slums like we have in Argentina and Latin America do not exist.”

The halt in economic activity due to the coronavirus pandemic has dealt a hard blow to Argentina's stuttering economy, which has been gripped by recession for the past two years.