Rescue teams saved two humpback whales stranded on the shores of the Atlantic coast in Argentina on Tuesday, the Fundación Mundo Marino said.

The animals were stranded on the beach of the seaside resort town of La Lucila del Mar, La Costa Partido, around 220 miles (360 kilometres) south of the capital, just as spring arrives to the southern hemisphere.

"The first, which was stranded on Sunday, was a juvenile female humpback whale, 32 feet (9.8 metres) long and approximately eight tons in weight," the Fundación Mundo Marino conservation group said in a statement.

The second individual, which "is a male of the same species, 28 feet long, and approximately seven tons, appeared Monday night," the foundation added.

Their collective efforts allowed the animals to return to the sea, the statement said.

"Upon arriving to survey the first animal's situation, primary support efforts were immediately carried out, including assuring the individual's position allowed it to breathe, keeping its pectoral fins underwater in order to stabilise its body temperature as much as possible," the organisation said.

The whole procedure was "difficult," the group said.

At one point, the force of the waves knocked the whale over so that the mammal's blowhole was underwater and it was unable to breathe.

"Thanks to a quick action, they were able to turn it over," said Sergio Rodríguez Heredia, a biologist at the Fundación Mundo Marino's rescue centre.

Rescuers tucked cables underneath the whale's body – connected to a huge backhoe tractor crane – hoping to free it from the sandy sea floor.

The workers noticed the second whale overnight, seeing it was in a "good state of health," said Augusto Giachetti, director of the Civil Defence's coastal division.

They waited until dawn to begin the second whale's rescue.

"It was necessary to realign the animal, using the assistance of a backhoe and special cables to move it a big enough distance that it was able to float," he Giachetti said.

Once the whale realised it was able to float, it swam out to sea. 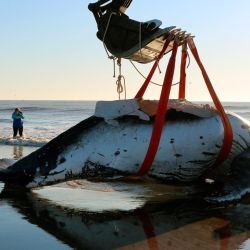 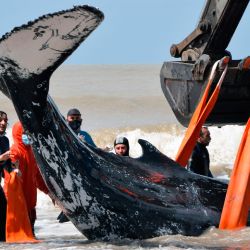 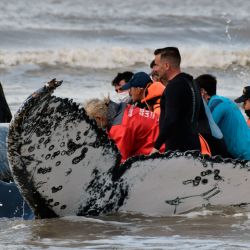 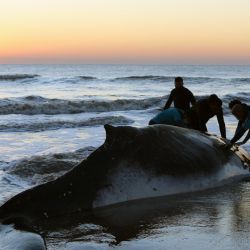