This January 18 was not just another anniversary for the parents of Fernando Báez Sosa, the 18-year-old who was beaten to death outside the Le Brique nightclub in Villa Gesell on the same date in 2020.

For Graciela Sosa and Silvino Báez, the marking of three years since “the worst moment of their life” – the brutal attack that killed their offspring – arrives as the eight young rugby players accused of murdering their son stand trial for their alleged crimes in Court Number 1 in Dolores, Buenos Aires Province.

Báez Sosa, who was an only child, died of head trauma caused by the multiple blows he received while lying on the pavement. The attack on him struck a chord in Argentina, sparking protests in several cities. As well as the violence, there was also widespread condemnation of the racial insults (Báez Sosa’s parents were born in Paraguay) allegedly shouted by the perpetrators as they struck the victim repeatedly.

On Wednesday, as they addressed an inter-religious ceremony at the Parque Libres del Sur amphitheatre in Dolores, the slain teenager’s parents called for “justice, not revenge.”

“We need justice to move forward. It is very difficult to live like this. Every morning when I get up I feel as if I have a very heavy weight on my back,” Graciela told a crowd who had travelled from near and far to support the family.

The mother recalled that before going on holiday, Fernando had told her how much he was looking forward to the trip. He knew that the trip to Villa Gesell was one of the last times he would see his friends before going off to university.

“I never thought he wouldn't come back,” said Graciela, fighting back the tears. “Since the day Fernando died, time has stopped for us.”

The defendants in the trial, now aged between 21 and 23 and former players for the Naútico Arsenal Zárate rugby club, face life in prison if convicted.

Máximo Thomsen, Ciro Pertossi, Enzo Comelli, Matías Benicelli, Blas Cinalli, Ayrton Michael Viollaz, Lucas Pertossi and Luciano Pertossi have all been detained in custody since the attack and initially adopted a “vow of silence” against investigators.

But there are signs, as the court case progresses, that their alliance is fracturing. Five of them have addressed the court in an attempt to deny or clarify their role.

On the ninth day of the trial, as video footage was shown in court indicating that Luciano Pertossi was present at the scene, the accused got to his feet and asked to make a statement. "I want to clarify something. I wasn't there,” he declared. Pressed as to where he was at the time of the murder, he refused to answer. 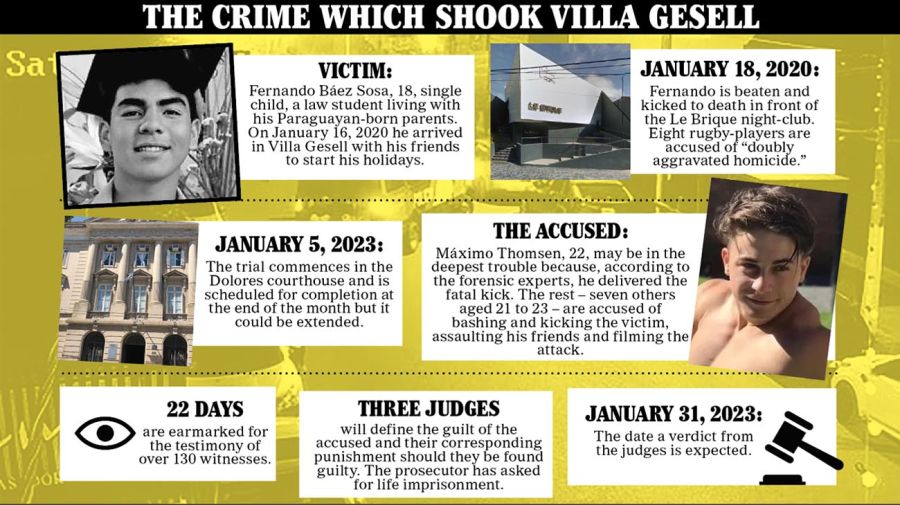 Máximo Thomsen, the main suspect, has also broken the pact. Describing the incident as a “fight,” he admitted to having kicked Báez Sosa “once or twice,” apologised for the tragic outcome and told the court: "I never intended to kill.”

Ciro Pertossi, meanwhile, told the judges that he had stopped participating in the attack when he “realised that the boy was on the floor.”

"The boy you see is me,” he said, pointing to a screen showing video footage of the attack. “I want to clarify that I didn't kick him, when I realised he was on the floor I stopped," he told those present in the courtroom.

Some 150 witnesses have been called to testify in the trial, which is expected to last three weeks. Judges María Claudia Castro, Christian Rabaia and Emiliano Lázzari of Dolores are expected to deliver a verdict on January 31.

According to prosecutors, on that fateful night in the summer of 2020, the members of the group (who have been nicknamed ‘los rugbiers’) had an altercation with Báez Sosa and friends inside the Le Brique nightclub in the Atlantic seaside resort of Villa Gesell. Security intervened and shepherded out the two groups separately, but the trouble didn’t end there.

Outside the venue, the 18-year-old victim was assaulted. Repeated kicks and blows to his body and head were registered, eventually causing his death. The brutal attack was caught on security camera and mobile phone footage.

Angered by the incident in the nightclub, five of the eight had “approached Fernando Báez from behind, taking advantage of the fact that he had his back turned and was defenceless, and … by virtue of their numerical and physical superiority, they surrounded him, rushed at him and began to strike him with their fists to his face and body" until he fell unconscious and lost his life, according to prosecutors.

"They kicked him several times on the ground on his face and head, causing him internal and external bodily injuries, which caused his death almost immediately, by causing a cardiac arrest due to neurogenic shock caused by severe head trauma," adds the indictment.

The other three from the group "also premeditatedly participated in the aggression with the aim of killing the victim, essentially enabling the crime,” it continues.

They "continued to strike him even when he was practically unconscious," said prosecutor Juan Manuel Davilia in court on the first day of proceedings.

The outlook is not good for the accused, who were filmed by several security cameras after the crime continuing about their business as normal, with some even going for a hamburger.

Within hours though, they realised they were in trouble, with WhatsApp messages exchanged between the group encouraging them to “not to tell anyone about this.” Tens of thousands of messages, images and videos from the mobile phones of the suspects have been trawled through, with communications between the accused in the aftermath of the attack shared with the court.

During the trial, forensic experts revealed that more than 50 items of clothing from the accused had been seized after the attack, 10 of which had Báez Sosa's blood on them.

"They took the decision to kill and they killed," said the family’s lawyer Fernando Burlando last week as the daily scrum of reporters following the case surrounded him.

"I don't understand how they are so cowardly and how they attacked my son. Let's hope that justice will act and give them what they really deserve: life imprisonment," Graciela Sosa told the press after the first day of proceedings.

"They attacked him from behind, they threw him to the ground. They smashed his head, that little body that I had in my belly for nine months," she lamented.

In a devastating detail, Silvino Báez revealed this week that his son had signed up to donate his organs, but “because of the beating he was unable to donate."

The family’s ordeal is nearly over. In 10 days, a verdict will be delivered by the court, one that Fernando’s family hope will finally deliver them justice.