Tears, cheers, screams of joy to the sky – Argentina celebrated in style on Saturday night as the country's long-suffering fans celebrated the end of a 28-year trophy drought.

All eyes were glued to television screens as the Albiceleste emerged victorious in the Maracanã, securing a 1-0 win over arch-rivals Braziil to take the Copa América title.

As Uruguayan referee Esteban Ostojich whistled to mark the end of the match – and captain Lionel Messi dropped to his knees in celebration on the turf in Rio de Janiero, Argentina erupted. In scenes recreated in villages, towns and cities across the country, supporters clad in light-blue-and-white streamed out onto the streets, cheering, jumping, singing and celebrating.

This is Argentina's first major title since 1993 and not just that, it's Messi's first trophy with the national team. For the first time, fans were able to see the best player in the world celebrate with his compatriots – double the cause for celebration.

"Finally, finally!", shouted Argentine commentator Juan Pablo Varsky as the win was confirmed, the sign for thousands to flood the streets and head downtown.

As is the custom, a huge crowd gathered around the iconic Obelisk monument in the nation's capital, Buenos Aires' famous scene for mass celebrations. With Covid-19 fears temporarily all but forgotten, the fans were out to celebrate in style. As the mass of supporters grew ever larger, cars soon began to flood Avenida 9 de Julio, honking their horns in delight.

The last time such large crowds had been seen in Buenos Aires was another football-related development: the sad loss of perhaps the country's greatest-ever player, Diego Maradona, last November.

Large crowds were also reported at various locations across the country, especially in Rosario, the birthplace of Messi and flying winger Ángel Di María, who scored the winner on Saturday night that clinched Argentina the title. 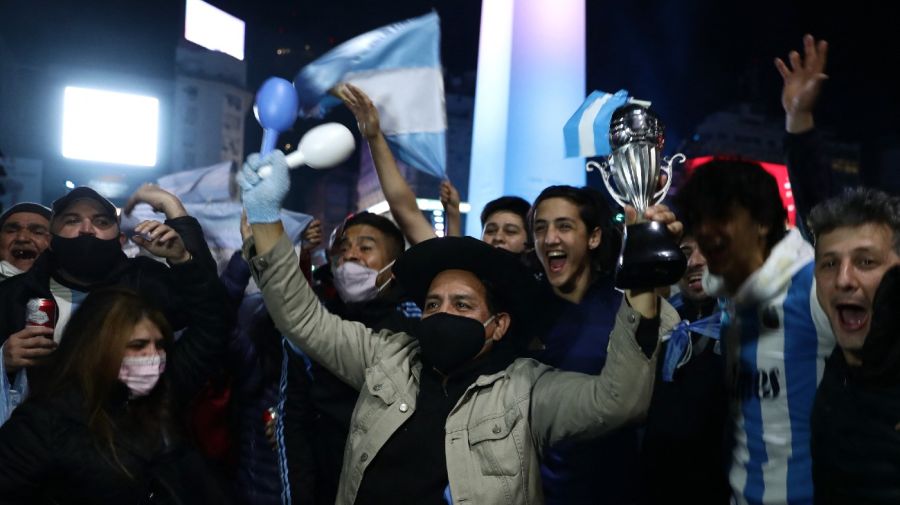 Joy – in times of pain

Social networks were another place where euphoria was channelled. Within seconds of the final whistle, #Estoyllorando was a trending topic, as was #Maradona, with thousands posting messages saying the late star must have had something to do with it.

"I want to congratulate and embrace our immense team for taking the country to the top," said President Alberto Fernández in a post on Twitter.

"The Argentine people will always remember that, in times of pain, they sowed hope and gave us enormous joy. VAMOS ARGENTINA! " he wrote.

Politicians across the aisle were soon posting messages, with la grieta – Argentina's stark political polarisation – briefly forgotten in a moment of national euphoria.

One TV clip that went viral showed one fan shouting that the country had finally been united, if only for a moment.

"Today there is no inflation, no parallel exchange rate, today there is only Argentina and we are together!" the unidentified fan screamed down a microphone from the C5N news channel.

Back in the bars, many were still in disbelief.

"I loved it, I saw us pressuring (...) and I loved seeing [Ángel] Di María score the goal, he deserved it," said 22-year-old Facundo Martínez at the Patio de los Lecheros, a food market in Caballito that projected the match on a giant screen.

Supporters had watched the game there and at various bars and restaurants nationwide while following Covid protocols, but the street celebrations on Saturday night were a far cry from following the rules.

Some were already expressing concerns about the potential impact on infections and fatalities the scenes may be responsible for.

Most fans, however, were still on cloud nine come Sunday morning. The long wait is over – and that's certainly worth celebrating.