Both the ruling and opposition coalitions fed the hostility, with their lawmakers and supporters clashing online as tensions rose to boiling point.

On Friday, Cabinet Chief Santiago Cafiero said that Argentines “must disarm the speech of hate,” after an incident at a 9 de Julio rally saw a van from the pro-government C5N news channel attacked by protesters.

Those words were met with outrage and charges of hypocrisy from some quarters, who countered that both Cafiero and President Alberto Fernández have been criticising journalists and their work of late in their own posts on social networks.

Four local youths have now been charged with Gutiérrez’s murder, but the fact that the ex-secretary to the former presidents was a whistleblower in the infamous ‘Cuadernos’ corruption scandal (although not a protected witness) triggered the Juntos por el Cambio opposition into issuing a rapid statement implying that the murder was not a common crime, a take echoed by many government critics on social networks.

The statement, in which the opposition requested that the investigation into the crime be passed on to the federal courts, highlighted the fact that the prosecutor involved in the case, Natalia Mercado, is a relative of Cristina Fernández de Kirchner.

"The crime of Fabián Gutiérrez is of enormous institutional gravity and cannot be left to the prosecutor Mercado, daughter of Governor Alicia Kirchner," said the release, signed by Patricia Bullrich, Federico Angelini (both PRO), Alfredo Cornejo, Alejandra Lordén (both UCR) and Maximiliano Ferraro and Mariana Zuvic (Civic Coalition).

Tensions also flared over the fate of jailed Kirchnerite tycoon Lázaro Báez, who was granted house arrest by a court on Wednesday after four years behind bars.

The decision to free the businessman, who is seen by many as a frontman for corrupt activities during the Kirchnerite administrations given the string of graft allegations against him, was seen as opposition supporters as the latest in a long line of decisions delivering impunity to those close to Vice-President Cristina Fernández de Kirchner.

He remains behind bars for now, however, as lawyers seek to lower the bail – 632.5 million pesos (US$8.9 million) – that must be posted in order for him to be released.

On Thursday, with the country’s traditional 9 de Julio celebrations in Tucumán cast aside amid the coronavirus pandemic and its accompanying lockdown, anti-quarantine protesters and anti-government demonstrators converged on downtown Buenos Aires for a large rally. Other rallies were also held across the country.

Many called for an end to both Fernández presidency and the prolonged coronavirus quarantine he imposed, in defiance of a presidential message calling for national unity against Covid-19.

"You can’t halt justice, it’s one of the most important powers, nor can we stop working. Health matters but the economy too – you can’t have one without the other. The state is there to look after us, not leave us paralysed," demonstrator José Carlos Vélez, 49, told the AFP news agency as he demonstrated.

Waving huge Argentine flags and honking their car-horns, the opposition demonstrators, many of them shunning face-masks, vented a broad range of grievances, including pro-life posters against the legalisation of abortion. Vice-President Cristina Fernández Kirchner came in for at least as much criticism as the president with one woman screaming that the ex-head of state was a “thief and murderer.”

A large balloon featuring a caricature of Fernández Kirchner, dressed up like a prison inmate with Alberto Fernández shown as a puppet, was on display during the event.

The call for a demonstration was backed by many opposition politicians, who in recent weeks have become increasingly vocal in their criticism of the Peronist government and its handling of the pandemic. Macri, while not citing the protest specifically, posted a tweet in favour of the demonstrators' demand for liberty and freedom.

The march was not without controversy. A van of the pro-government television news channel C5N, which was covering the main protest around the Obelisk was attacked by demonstrators, who broke a window and shouted insults and threats, acts of aggression earning the prompt repudiation of Cafiero, Interior Minister Eduardo “Wado” de Pedro and Legal and Technical Secretary Vilma Ibarra among others while President Fernández tweeted against “serial haters,” repeating a phrase used in his speech marking the 9 de Julio anniversary.

Government sources attributed this radicalised opposition to anti-Peronist and anti-democratic sectors whipped up by certain media but also admitted that the relaxation of quarantine would be hard to resist, given that residents in the Buenos Aires Metropolitan Area (AMBA) have been locked up since March 20.

It is also thought that some of the news in the last month – such as the government's bid to expropriate the bankrupt Vicentin grain conglomerate – may have contributed to the heated feelings at the demonstrations. 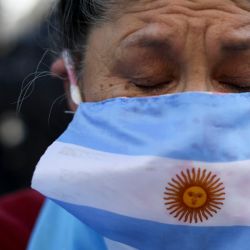 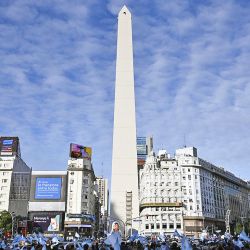 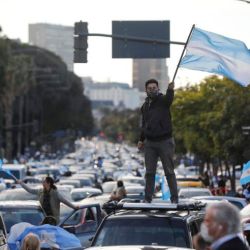 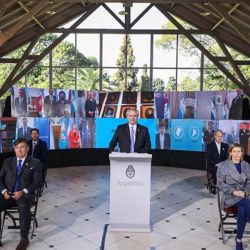