Alberto Fernández and Cristina Fernández de Kirchner see each other at least twice a week, with long chats covering a wide range of issues. The dinner shared on the Thursday evening of June 4, at the Olivos presidential residence ought not to stand out among so many other meetings normally kept in reserve. But it does – it was that meeting which convinced the president to announce the expropriation of Vicentin, as he did the following Monday. If the decision to slap a trusteeship on the grain conglomerate and send a bill for its nationalisation was perhaps the most emblematic moment in the political construction of the new government to date, the meal shared by the president and his veep shrouds the big question, the one asked by the whole country, the one that has been asked ever since Fernández de Kirchner revealed the identity of her presidential candidate: ¿Qué pasa entre ellos?

Asked by Noticias, the official version, like most formal responses, offers a rosy picture of the relationship between the two. “There are no differences, they think the same way,” is the terse reply given by one of their spokespersons. But fast-forwarding to the Vicentin issue highlights that at the very least there are differences over pace within the government.

“Alberto kicked off Cristina-style, announcing the expropriation without consulting anybody and afterwards reverted to being more in character,” says one follower of Lower House Speaker Sergio Massa, who mistrusts the intentions of the hardcore Cristina camp and who knows both protagonists well. Although all the evidence points to Fernández having made up his mind before consulting the former president, it was also to be expected that she (following this issue via her pet senator, Anabel Fernández Sagasti) would have to give her blessing. So who makes the decisions?

Although Alberto and much of his Cabinet resent the persistent probing on the issue, this doubt has been latent since May 18, 2019. Ever since Fernández de Kirchner uploaded the video announcing who would be her candidate, there has been the singular paradox of a nominal leader without any power or votes of his own, thus validating the doubts as to who would govern. Doubts raised by not only the political logic of Argentina but also by history – in this country the experience of a presidency without its own backing, as of Héctor Cámpora, has always ended badly as Cámpora himself could bear witness.

The art of advancing backwards

Perhaps it’s the past bringing back bad memories that makes President Fernández so uncomfortable when probed on this point.

A short time ago, somebody he’s known for decades went to see him, an intellectual now on the other side of the “grieta” rift. The somebody began by insistently asking Fernández de Kirchner about the growing projection of his veep in the government. The president retorted with a phrase which his supporters began to repeat afterwards: “I provided 10 to 15 percent of the Frente de Todos vote. Without Cristina it would not have been possible, but nor without me either. I have no boss.”

Such is the logic which makes the president feel, perhaps rightly, indispensable in reference to how his presence managed to broaden the political base of Kirchnerismo. According to this reasoning, the president and his veep are two complementary poles which permit governability and one cannot advance without the other, in the same way that you cannot erect a roof without the four walls to hold it up. One of his most important ministers, who got to know Alberto during a campaign some years ago, backs up this viewpoint: “At times their criteria differ, but it’s clear that they are on the same path towards the same aims.”

Over issues where there are no rifts, the duo perform like a team that’s known each other for a long time, as is the case. One of those fields which stands out is, ironically enough, a world where neither is expert – the economy. Martín Guzmán is one of the vice-president’s favourite ministers, one whom she likes to congratulate both in public and private.

“As regards the economy, they are perfectly in sync. Until now Cristina has not questioned the thrust of economic policy in any direction, whether debt negotiations or the Central Bank’s monetary policies,” says one of the government’s most important men in this area. A secretary of state, also a key member of Alberto’s economic team, complements this view: “In my experience, neither Cristina nor any of her people have ever told me what to do.”

It is true, however, that there was a clash in this sphere although more linked to the portfolio of Labour Minister Claudio Moroni, whom the former president eyes with misgivings. She disagreed with subsidising the salaries of big companies, even ahead of knowing that the list included Techint and Grupo Clarín. But it was a minor issue and one of Massa’s leading lights in Congress offers another line of reasoning: “There is no conflict because CFK sets the broad lines of government and Alberto accepts that and administers that power.”

But that’s only half the story. In other areas the “differences of criterion” between Alberto and Cristina appear and multiply. One of them is the relationship with the opposition. In the entourage of City Mayor Horacio Rodríguez Larreta, who seems increasingly close to the president, they swear that Fernández has confessed to him that at times he has to tolerate a certain annoyance on the part of the vice-president when the PRO strongman shows up in Olivos.

The president’s decision to summon Rodríguez Larreta urgently on the Friday night of May 15 with the message: “I need you,” when all Cristina’s supporters were harsher than ever in their criticisms of Mauricio Macri’s former City Hall Cabinet chief, speaks for itself. A close presidential aide attempts to lower the tone: “They always had different styles. In Kirchner governments Alberto spoke to Clarín, farmers and the ATE state workers who denounced INDEC statistics. There is nothing new in his conciliation and it’s not something he’s thinking of abandoning: when he had differences with CFK, he resigned and she knows that.”

To the Rodríguez Larreta relationship should be added another factor of power – and perhaps of future tension. Somebody who also stayed mum while the Vicentin storm passed by: Sergio Massa. The speaker has been weaving his alliances silently (and skilfully) and now faces a difficult juncture – how to bring together votes for an expropriation which he does not agree with.

The resolution of that debate in the Chamber of Deputies could offer a sign as to the government’s health – whether Massa will have a deciding vote and be a Julio Cobos (the 2008 vice-president who frustrated the CFK presidency’s grain export duties bill) or whether he will come down on the side of the government? Either way, it could be a watershed in the former Tigre mayor’s long career. 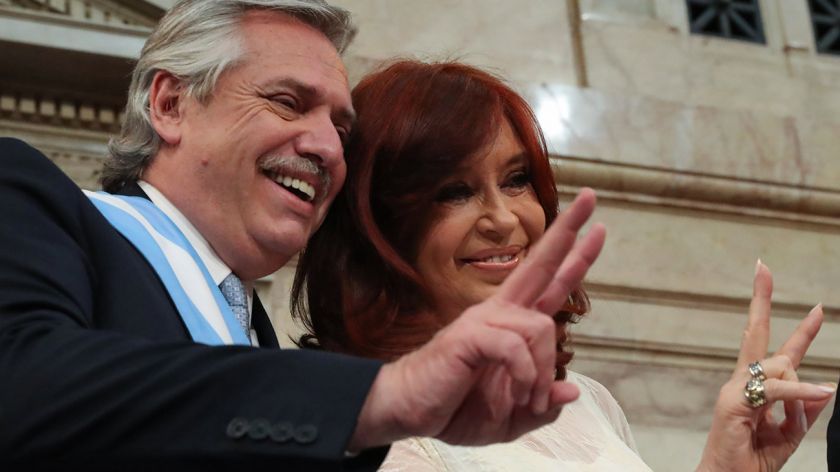 For the most part, the presidential pair do not do battle directly, nor do they show any desire to do so, sources say.

“The relationship between Alberto and Cristina is great but below that level we’re going to tear each other’s eyes out, as in any good Peronist government,” forecast one of the leading men from the Instituto Patria, some months back.

He was right. The Justice Ministry is one paradigm, for example: Marcela Losardo, the lawyer who has been a close friend of Alberto for decades, is trying to resist the onslaught of ultra-Kirchnerismo as best she can, despite having set Fernández, as a condition for taking office, that the portfolio not be overrun – an act practised by Kirchnerism with surgical precision in the past. The president could not – or did not want to – pay the price and the presence of Juan Martín Mena (a figure close to CFK) as deputy minister undermines Losardo, while the much-vaunted judicial reform is still awaited.

Perhaps with the passage of time that decision might be reviewed – one of the few fierce debates between Cristina and Alberto in late April, and which leaked out beyond the intimacy of their relationship, involved Mena. After Nicolás Wiñazki published in the Clarín newspaper the scoop that the Justice secretary had power over the Access to Public Information Department answering requests for official information, they say that CFK entered Olivos furiously, blurting out to the president that some important member of his Cabinet had leaked the information in order to leave her judicial dauphin exposed.

Although the issue died down without further ado, it conceals a reality: that the vice-president is authorised to complain loudly whenever she likes, above all in that area. Although probably never verbalised, the Fernández presidency has an implicit mandate – to help put out the judicial fires stalking Cristina and her family by 2023.

Another fact about the Justice Ministry, where not only Cristina is gaining ground: Juan Grabois, the social activist who supports the government (although he is being increasingly rebellious), has succeeded in placing a woman of his confidence in a key area, the Access to Justice Centre, also undermining Losardo’s authority.

The struggle to appoint officials, an overdue issue (as CFK has let Alberto know), is another focus of conflict. Here again the veep appears playing her game again – in YPF, headed by the man Fernández wanted as economy minister, Guillermo Nielsen, she placed – in one of the big cash cows controlled by the state – Sergio Affronti as CEO, a man who responds directly to her.

Beyond that tussle for power there is another – the growing pressure of powerful sectors which clashed with Cristina in the past to found “Albertismo.” Trade unionists Armando Cavalieri, Gerardo Martínez and Andrés Rodríguez have already directly asked that of the president, who – showing the skill which  catapulted him to where he is – found an elegant exit from the issue: “We shouldn’t found Albertismo or Cristinismo but Frentedetodismo,” asking a close presidential friend to take charge. 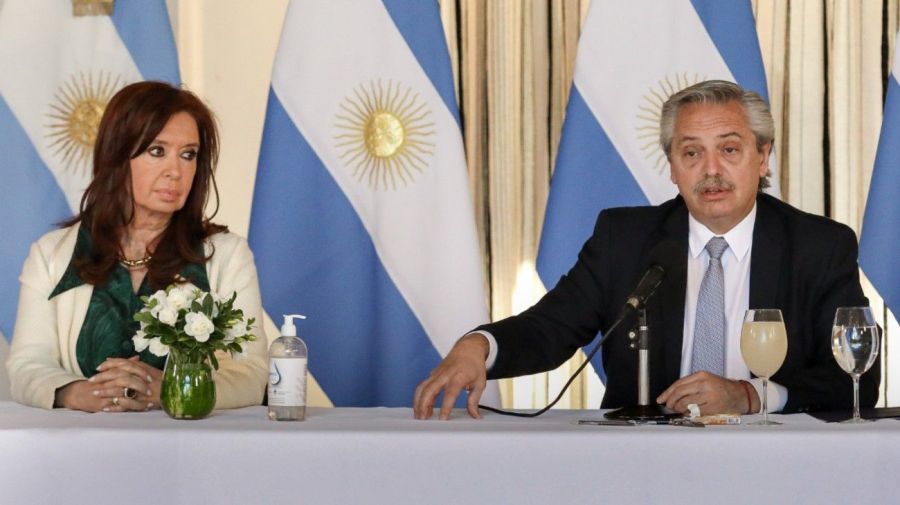 Perhaps the problem of understanding how (at least for now) the government runs is more structural than political – in a divided Argentina it is difficult to think, or believe, beyond binary terms. Especially when it comes to Peronism, a movement founded by a general where respect and obedience to the vertical chain of command are inscribed in its DNA.

But yet, six months after arrival in the Casa Rosada, the Fernández-Fernández ticket threatens to enter into history as a novel power formula – Alberto is not a puppet but he takes great care not to cross CFK over sensitive issues. She does not dominate, but neither does she spend her days watching Netflix. There is also an almost mathematical question – Kirchnerismo is the majority partner (both rank and file) within Frente de Todos so, as happens in any political alliance, it logically occupies more relevance than the rest. And not only that, it is also to be expected that the government will grow more “Vicentin” with the passage of time – i.e. that the group with most presence goes imprinting its character on the other sectors. Even the president himself.

Nevertheless, Frente de Todos has completed little more than an eighth of its mandate. As this government unfolds, tensions will start to bloom, while the logical fatigue of the politicians comprising it will grow along with less patience to calm infighting.

The most often asked question Argentina still awaits an answer to. One thing is clear (and it’s not at all a new one): if they cease to be united by love, they will be united by dread of losing power, which is usually accompanied in this country by trials and other misfortunes. Half of power is better than none at all.

Decades on, the Grandmothers’ search for stolen children continues