Disturbing reports of attacks on journalists and photographers also circulated, with at least three suffering injuries at the hands of the security forces.

Prominent opposition lawmakers and union leaders condemned the “militarisation” of the nation’s capital on Thursday,  after protesters clashed with police outside Congress and the government’s attempts to reform the nation’s retirement and pension system ran into trouble inside the Lower House.

Disturbing reports of attacks on journalists and photographers also circulated, with at least three suffering injuries at the hands of the security forces.

In scenes splashed across the nation’s TV screens and social media, police in riot gear shot tear gas and rubber bullets at stick-wielding protesters who torched several garbage bins and threw rocks outside the national Congress building and in the nearby streets. Inside the National Congress temperatures were also running high, as the intended debate on the reform package became a shouting match, leading to its eventual indefinite suspension. Union movements, political parties, picket groups, NGOs and individual citizens had all taken to the streets to demonstrate against the government’s reform package. Reports from local media outlets suggested that at least 30 people were injured in clashes between police and protesters, with at least 40 individuals arrested and an additional 12 members of the security forces suffering injuries.

“Congress has never lived through a state of militarisation like the one that we lived today,” said opposition lawmaker Agustín Rossi (PJ), adding that he had been hit by tear gas. The CGT, the country’s main trade union umbrella grouping, also pointed the finger at the government, blaming it for the “militarisation of the surroundings of the congress.” Nonetheless, most eyes were drawn toward the trouble on the streets.

“We’re not willing to take this. The people are going through bad times and we don’t deserve this,” said Monica de Albuquerque, a retiree who joined in the protests. Responding to the claims at a press conference, Cabinet Chief Marco Peña said the opposition had opted “for violence instead of opting for dialogue and peace.”

“We’re convinced there is majority of lawmakers who wanted this vote, that’s why we secured two quorums during (Thursday’s) session. There is a majority who want this reform,” he told journalists, at one point describing the opposition as “picketers.” Lawmakers including Victoria Donda (Libres del Sur) and Leonardo Grosso (Movimiento Evita) said they had suffered injuries from clashes with the security forces. Victory Front (FpV) representative Mayra Mendoza was peppersprayed in the face. Facundo Moyano (Renewal Front), meanwhile, complained he was not allowed entry into Congress.

Between them, the three injured journalists received at least 22 rubber bullet wounds, mostly in the legs and some in the chest, photos released yesterday revealed. “Two motorcycles appeared with policemen. I put my hands in the air with my camera and identified myself as ‘press’ and they shot at me all the same, at my legs,” said Perfil’s Marcelo Silvestro, a photojournalist. “I haven’t received a rubber bullet wound for 16 years. The last time was during the 2001 crisis,” he said, adding that he had received at least 10 wounds from Thursday’s clashes.

His colleague Pablo Cuarterolo, a print journalist for Perfil, was also attacked, this time by officers who refused to give their names.

Pablo Piovano, a photojournalist for Página 12 received 11 rubber bullets to his legs and chest according to his wounds.

Default rocks the Argentine brokers who sell soy to the world

Both Cuarterolo and Piovano reported the presence among protesters of police infiltrators who stoked the violence, an accusation that has been regularly made against the security forces and the government since the protest march for Santiago Maldonado on October 1.

Press freedom organisation FOPEA on Friday expressed its disapproval of the “repressive behaviour” on show and calling on security forces to “guarantee the work of journalists and the right to inform.”

The Catholic Church also spoke out yesterday expressing its concern about “political violence” inside and outside Congress and calling for “peace and dialogue.”

Argentina’s government needs to speak with one voice on debt

Judge probes whether Messi was spied on by government agencies 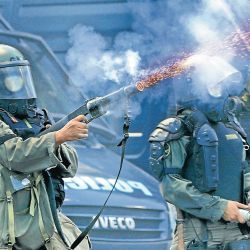 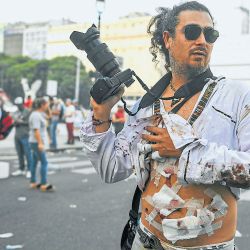 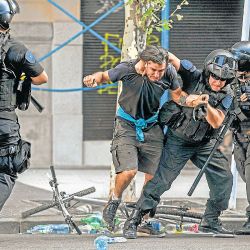