Replacing the cobblestones in the roads, reconditioning the façades of emblematic buildings, creating pedestrian streets – the historic centre of Buenos Aires is going through some urban renewal in a bid to rescue its weary core from the ravages of the pandemic.

On Calle Humberto Primo in the old colonial neighbourhood of San Telmo, just a few blocks away from the traditional Plaza de Mayo, workers have ripped away the asphalt to place one by one the cobblestones which had been withdrawn almost a century ago.

Bicycle lanes, the planting of trees, bus routes diverted, the vast restoration of heritage sites like the 1914 modernist Otto Wulf building, which in the past housed the embassy of the Austro-Hungarian empire – some 67,000 square metres downtown have been entered into the 'Plan Casco' restoration scheme with an investment from City Hall of 2.2 billion pesos (around US$18 million).

"The objective is to recover one of the most iconic and historic neighbourhoods, with some of the most important cultural and architectural heritage in the city, " explains Buenos Aires City Government Cabinet Chief Felipe Miguel.

Ironically enough, a decade ago, when Mauricio Macri (later president from 2015 to 2019) was mayor, governing from the same centre-right party, the cobblestones in several City neighbourhoods were covered with asphalt on the grounds that it reduced noise pollution, was better for tyres and improved drainage.

Nevertheless, over 3,400 streets in Buenos Aires still have cobblestones.

"Some neighbourhoods have changed while other more typical ones must be preserved," justifies Miguel.

Today, heritage has once again become the future. It could give fresh impulse to the Microcentro area, the financial and office area which co-exists with historic monuments. It was left practically lifeless during the height of the Covid-19 crisis.

"The pandemic marked a turning-point, exposing a problem which was already happening – the loss of inhabitants in the city, a 'floating' population overworked during the day and underused at night with shops adapting accordingly," explains architect Silvia Farje, an expert in national heritage.

According to her, young people are not attracted to the idea of living in a neighbourhood of ancient buildings which is paralysed almost daily by demonstrations. This part of the city does not enjoy the digital comforts to which they became accustomed during the long confinement period.

The idea of redeeming heritage is somewhat ironic for a city that has not always taken care of its history. In 1894, for example, it did not hesitate to tear down part of the old Cabildo town hall, an iconic building dating from 1751, to construct the Avenida de Mayo, modelled on the great boulevards of Paris.

The golden age of Argentina's high society, between 1880 and 1930, and the successive waves of European immigrants made Buenos Aires a strange mosaic of influences, from the colonial style to Art Deco, from the Italian neo-Renaissance to rationalism.

"The charm of Buenos Aires is that mix of styles. An eclectic heritage where the mixture predominates," sums up Patricio Cabrera, from the Basta de Demoler association.

Nowadays, on the façades of Avenida de Mayo, banners with the legends "For Sale" and "For Rent" are multiplying.

"Before the pandemic, on average around 60 percent of the Microcentro area was occupied by offices. Today, that occupation represents around 20 percent,” said Miguel.

Many will not return and without customers, the shutters on the shops in the region will remain down.

And so, the idea of reviving a “mixed-use centre” was born, with professionals, tourists and young students all passing through.

Since 2021, credits for real-estate development and tax exemptions for businesses have been increased. The aim is to transform offices into housing.

In the short term, the authorities are betting on the 2.1 million foreign visitors a year that Buenos Aires receives, according to pre-Covid data.

But there is also a risk of the area falling somewhere between a "touristification" and "gentrification" of the historic centre – as has happened in major capitals around the world, as the Observatorio de la Ciudad NGO has warned.

Basta de Demoler recognises "good intentions" in comparison with the neglect of heritage 40 years ago. But the organisation cautions about the dangers of "sacrificing the essential to the aesthetic" – and of the risk of turning the capital’s historic centre into some sort of theme park. 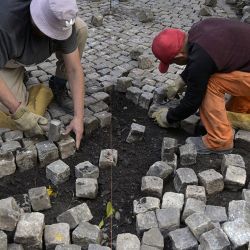 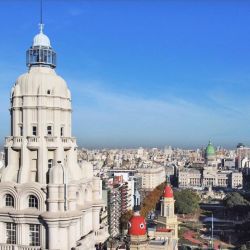 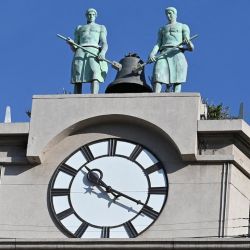 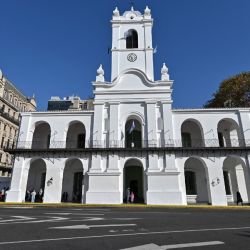