Union leader Hugo Moyano sought to brush off corruption allegations this afternoon as he led a massive protest in the capital against the policies of the Mauricio Macri administration.

Moyano declared that did not fear jail time and said he was not involved in any case of corruption. He opened his speech by stating that "we did not come to threaten the government,” instead saying he sought only to draw attention to the hardships facing the nation's workers and citizens.

"Stop carrying out policies that starve the most sensitive part of our society – our dear retirees and ... that starve the future of our children," he demanded of the government.

Although he stopped short of calling for an all-out strike further down the line, Moyano criticised the government strongly, though he lightly rebuked protesters at one point who began chanting insults against the president and his family.

Led by truck-drivers, representatives from more than a hundred unions and leaders from social organisations, demonstrators took over streets in downtown Buenos Aires, bringing traffic to a standstill on the iconic 9 de Julio avenue.

The protesters, each group uniting behind the flags of their respective unions, sought to denounce the Macri administration’s austerity policies, which they claim is unfairly burdening the nation’s workers.

Though turn-out was clearly high, with unofficial estimates putting the crowd at around 150,000 to 200,000 people, as ever with such events in Argentina there was a large disparity in numbers. The event’s organisers claimed as many as 400,000 people had participated in the demonstration. City police did not offer figures.

What we learned this week: November 21 to 28

Argentines have continued to lose purchasing power of late, due to a high inflation rate. Many are frustrated with lay-offs, increases in fuel and transportation costs and the slashing of subsidies for utilities. But despite those feelings, the nation's unions were far from united yesterday, with many opting not to participate, including those in the transport sector.

Nonetheless, today’s protest action comes in the middle of crucial wage negotiations for 2018 and follows on from a rough few weeks for Moyano. Many of the veteran union leaders’ colleagues in the union movement distanced themselves from the march, with some alleging that Moyano was using the protest to flex his own muscles amid a series of new corruption allegations against him and his son Pablo, the current leader of the Teamsters’ union. Moyano senior has been indicted on money-laundering and illicit enrichment allegations, charges he denies.

The Macri administration has sought to limit the power of the nation’s influential unions in the country’s transport and logistics sectors. For his part, Moyano claims unions are being "persecuted."

Addressing the crowd at the intersection of 9 de Julio and Belgrano avenues, Moyano claimed the Macri administration "despises workers" and said the government was "mortgaging the country with debt."

"We are not destabilisers. We are not the leaders of a coup, as they were in the past or allies of coup-plotters. We are not anti-democratic, because we were the workers that fought so that democracy could return to this country,” he said.

Closing his speech, Moyano addressed the graft claims against him.

Maradona, a Peronist with a high political profile

“I am not involved in any corruption case. I do not have money outside the country," Moyano said, a thinly disguised reference to officials in the Macri administration that have faced problems of late.

Speaking from Entre Ríos, Macri criticised the protest action, without referring specifically to the march or Moyano.

Maradona: the icon who lead Argentina to glory

"We want solutions without pressure, without extortion, without mafia-like behaviour," he said.

Some government officials have recently accused Moyano of organising the demonstration because he is being investigated.

Why Maradona was better than Messi, Ronaldo, all of them

Covid-19 vaccine in Argentina: Who, what, when and how 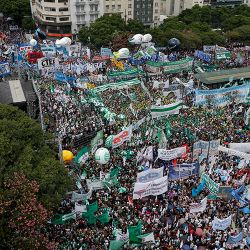 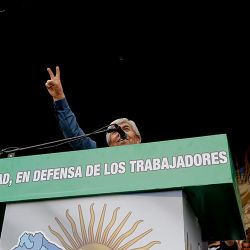 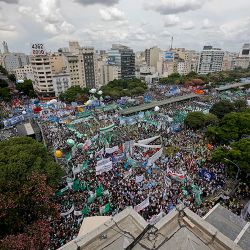 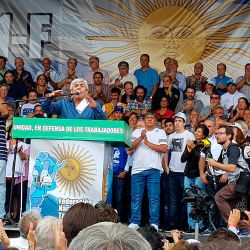