When you became minister, they linked you to La Cámpora and Kirchnerism. How would you define yourself?

They’ve also called me Rambo, Taliban, criminal, a bit of everything. I’m a Peronist who has been voted by the people to many posts. I define myself as a Peronist.

These definitions were made in order to single out who appointed you. Was it Alberto Fernández or Cristina Kirchner or both of them?

You speak of producing consensus for those transformations. Can you sit down with a Judiciary which feels under attack?

I don’t believe that the Judiciary is indifferent to regaining legitimacy, prestige and transparency. I don’t think we can put everybody in the same bag when five judges and six prosecutors are at fault. Generalising and smearing the entire judiciary because of a handful of judges and prosecutors who lent themselves to the manipulation of Mauricio Macri and his government would be a serious error.

Did the Supreme Court play along with this manipulation?

That’s the helm of the Judiciary whose manipulation by the Macri family is nothing new – they did it towards the end of the last century when they rode the automatic majority of Carlos Menem’s Supreme Court to be acquitted of tax evasion, somehow repeating this during the Macri government, this time from the state itself. Macri sought to decree two Supreme Court justices and afterwards they served him pretty well. This transformation which we must have has plenty to do with the Supreme Court.

Aren’t you clashing with another branch of government?

The corporations always take anything done against them as attacks but then say nothing about the judges or prosecutors sneaking into the Casa Rosada or Olivos presidential residence.

What do the 15 visits paid by Cassation Court judges Mariano Borinsky and Gustavo Hornos to Olivos and the Casa Rosada mean to you?

They are both judges in the court reviewing every penal conviction and acquittal below the level of the Supreme Court, which is serious. There can be no doubt that Macri himself knew about the judicial panel, thus confirming how much the independence of the Judiciary has been affected and how partial it has become. It’s obscene evidence of how the rule of law has been violated.

Borinsky intervenes in cases like Kirchnerite public works corruption and money-laundering trials and the memorandum of understanding with Iran. Could this lead to his rulings being quashed or his impeachment requested?

It wouldn’t be prudent to jump ahead in the analysis of different cases but it strikes my attention when judicial officials so clumsy as to enter the Casa Rosada and Olivos presidential residence and the next day issue rulings making for screaming newspaper headlines do not excuse themselves from the cases. I don’t know how those cases are going to end up but it has been demonstrated that the transparency, impartiality and independence of those judicial officials has been compromised.

Borinsky says that those visits were to play paddle and due to his role heading the Commission to reform the Criminal Code.

One thing or the other, either playing paddle or chatting about Procedural Code reform. What Borinsky does not say is that this commission was created eight months after his first visit and that the meetings regarding Criminal Code reform are officially registered in the public hearings of the Interior Ministry, not sneaking into Olivos to play paddle because they omitted informing the public register at the time.

Both the judicial reform and the changes in appointing the Attorney-General are shelved in Congress. Will they pass this year?

We must seek and appeal to dialogue and consensus. There is a totally reactionary sector of the opposition owing to their having formed part of that promiscuity which eroded the rule of law under Macri but that sector does not represent the spirit of the rest of the opposition.

These bills seem to represent political needs far removed from the justice which people need.

One sector of the opposition tries to reduce what we’re trying to do as a quest for impunity. That’s such an overused and tired phrase and so far removed from reality because no bill moves in that direction. Today we’re talking about the judicial panel and the manipulation of justice. I’ve been minister for just a week and my role is much broader, it has to do with solving people’s problems by ensuring that trials are not eternal, speeding up the response to labour litigation, evictions and femicide. It’s so obscene what they did to manipulate justice to persecute opponents that we have to talk about these things.

Did the vice-president ask anything of you when you took office?

No, beyond her message of congratulations, I only spoke to Máximo [Kirchner], whose caucus I had formed part of. He did not ask me for anything.

Cristina Fernández de Kirchner has spoken of insufficient reforms and the president of a new stage. What’s the shape of things to come?

The president spoke of the need for a bill to create an intermediate tribunal but also of reforming the Council of Magistrates, we cannot have things dragging on for years and years and years.

The law finally catches up with Cristina

Doesn’t having the vice-president’s defence lawyer Roberto Boico entering the Federal Appeals Court seem to you a lack of independence?

Any lawyer may present themselves, otherwise no lawyer defending a political leader could apply.

The problem is what they do afterwards.

I know what those decreed or (worse) transferred by Macri did. Let’s not forget those things because otherwise everything seems the fault of Cristina’s lawyers and it isn’t. They speak of how interested we are in justice and if you look at the number of appointments per president, [Néstor] Kirchner named 101 judicial officials in four years, Macri 216 and Cristina 285 in eight years. Those who say we want to co-opt justice should look at the numbers. 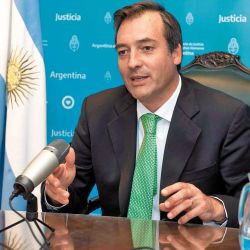 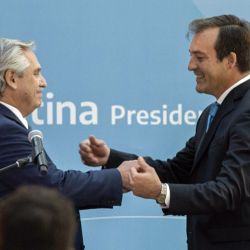 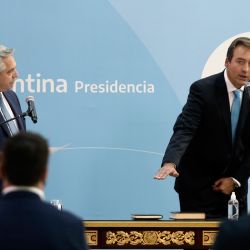