A 35-year-old man has been detained by police after he aimed a handgun at Cristina Fernández de Kirchner at point-blank range as the vice-president returned to her apartment in Recoleta, Buenos Aires.

Fernández de Kirchner was not injured in the suspected assassination attempt late Thursday night, said government officials. The perpetrator was quickly detained by the federal police and the former president's bodyguards. According to reports, he pulled the trigger twice but the gun failed to fire.

Images of the man, later identified as Brazilian 35-year-old Fernando Sabak Montiel, pointing the gun at Fernández de Kirchner's head as she got out of a car that was driving her from Congress to her residence were recorded by several bystanders and news organisations. The footage was soon being replayed on television channels and social networks within minutes.

Government officials confirmed Thursday that Montiel had been arrested last year for possession of a dangerous weapon.

Security Minister Anibal Fernandez said on live television shortly after the attack that the perpetrator had been detained and that the incident took place as the Senate chief was returning to her home in the wealthy Buenos Aires neighbourhood.

"Now the situation has to be analysed by our people from the forensic police in order to evaluate fingerprints and the capacity and disposition of this person," the minister added.

The suspected attacker reportedly approached Fernández de Kirchner from a waiting crowd of supporters that have been holding a vigil outside her apartment block, before asking for an autograph for a copy of her best-selling autobiographical book, Sinceramente.

"Cristina remains alive because, for a reason not yet technically confirmed, the gun, which had five bullets in it, did not fire despite having been triggered," President Alberto Fernández said in an address to the nation aired close to midnight.

Hundreds of activists have gathered near the building that houses the vice-president's building, on Juncal and Uruguay streets, for more than a week. They are staging the vigil in rejection of an ongoing corruption trial against the 69-year-old former president, who stands accused of fraudulently awarding public works contracts in her stronghold Santa Cruz Province in Patagonia.

Prosecutors have asked that the ex-president, who ruled from 2007 to 2015, face 12 years in jail and a lifetime ban from politics.

As Senate chief, Fernández de Kirchner enjoys parliamentary immunity. Even if convicted – a verdict is expected at the end of the year – she would not go to prison unless her sentence was ratified by the country's Supreme Court, or she loses her Senate seat at the next elections at the end of 2023.

Tensions have risen sharply in Argentina in recent weeks as the trial against the vice-president progresses. Fernández de Kirchner, who denies the allegations, has accused the opposition of leading a plot orchestrating "judicial and political persecution" against her.

She has been acquitted in several cases for alleged crimes that occurred while she was president, but still faces five trials.

Cases of political violence are extremely rare in Argentina since the return of democracy in the early 1980s and Thursday’s attempted magnicide unified government and the opposition in denouncing the attack. It was swiftly condemned by the Juntos por el Cambio coalition, which called for an immediate investigation into the incident, and also by members of President's Alberto Fernández's administration.

Economy Minister Sergio Massa tweeted: "When hatred and violence prevail over the debate of ideas, they destroy societies and situations like today's are generated: an attempted assassination. All my solidarity to @CFKArgentina and her family."

Santiago Cafiero also expressed his solidarity. They wanted to kill @CFKArgentina. It is the most serious act of political violence since the return of democracy. Fuerza Cristina," he wrote on Twitter.

Buenos Aires City Mayor Horacio Rodríguez Larreta, who has exchanged criticism with the vice-president this past week over the vigil, expressed his "strongest repudiation" over the attempted attack. Earlier this week, supporters of the vice-president clashed with police as City officials attempted to put up barriers on the streets near Fernández de Kirchner's home.

"My total solidarity with @CFKArgentina and my strongest repudiation and condemnation of what happened tonight. Justice must act quickly to clarify the facts," wrote the opposition mayor.

"This is a turning point in the democratic history of our country. Today, more than ever, all Argentines have to work together for PEACE," he wrote.

"My absolute repudiation of the attack suffered by Cristina Kirchner, which fortunately has had no consequences for the vice-president. This extremely serious incident requires immediate and thorough clarification by the justice system and the security forces," said former president Mauricio Macri, who succeeded Fernández de Kirchner in office, in a post on social media.

Reports also emerged that politicians from both the ruling Frente de Todos and opposition Juntos por el Cambio coalition were organising a press conference at Congress to jointly condemn the attack. 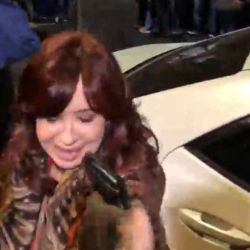 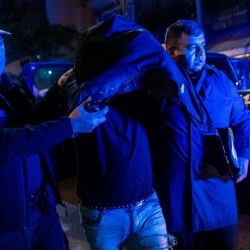