One week on from his impressive win in the midterm elections, President Mauricio Macri finds himself in a position of strength.

As the celebratory balloons fell on the stage of his party’s bunker in Costa Salguero, in the early hours of Monday morning, the president could survey a political landscape much more to his liking.

Voters had handed him a new mandate that will help his coalition pass its pro-market agenda in Congress and the president is well-positioned to run for re-election in 2019, while facing an opposition that’s far from unified.

The ruling Let’s Change (Cambiemos) coalition emerged victorious after taking 13 of the country’s 24 provinces, including nine of the 10 most populous districts.

But while most eyes were set on former president Cristina Fernández de Kirchner — who lost the key senatorial race in Buenos Aires province to Macri’s ally Esteban Bullrich — the big losers of the night were the Peronists as a whole. Fiercely split over what to do next, analysts believe they need a debate about how to renew the party, or else abandon all hopes of governing the country in the near future.

“With these results, Let’s Change confirms and extends its success as an electoral coalition,” political consultant Enrique Zuleta Puceiro told the Times. “This represents substantial progress toward strengthening the coalition’s institutional identity, although to achieve that they’ll still need to perfect their negotiating skills in Congress.”

For the head of the OPSM consultancy firm, the challenge now for Macri is to give his political allies a greater role in the decision-making process.

Until now, UCR leaders have only been given a handful of key ministries and secretariats — but now that the “critical stage” has passed, they have renewed their demand of participating in the day-to-day decisions. Those normally fall with the domain of the president’s inner circle or to a group of ministers aligned with Cabinet Chief Marcos Peña. The same applies to Elisa Carrió’s Civic Coalition (CC).

But there’s another huge challenge ahead for the Macri government, which can be summarised in one phrase: with great power comes great responsibility.

“From now on, Let’s Change will be the sole recipient of all social and political demands,” María Esperanza Casullo, who holds a PhD in Government from Georgetown University, told the Times. “The coalition’s task is to establish a new set of rules through the passing of new laws.”

According to Zuleta Puceiro, new legislation could include a much-discussed labour reform, a revision of the tax system and the government’s proposal to gradually increase the retirement age.

The tools are already there. After receiving 40 percent of the nationwide vote on Sunday, Macri and its allies won nine senators and 21 national lawmakers at the Lower House. They still haven’t got a majority of their own in Congress, but they’re pretty close to start their own debates and passing several bills is possible by attracting support from moderate Peronists.

To this end, the president has invited governors, union leaders, businessmen and Supreme Court justices to a meeting on Monday to explain the main tenets of his proposed reforms.

RISING FROM THE ASHES? So who are the Peronists in Congress and why are they so important? First of all, it should be noted that they are a very diverse group of lawmakers.

Some are staunch Kirchnerites who are likely to form their own caucus in both houses (they more more numerous in the Lower House than in the Senate), others — like Senator Miguel Ángel Pichetto from Río Negro, who parted ways with Fernández de Kirchner following the 2015 elections — are centre-right leaders opposed to the Macri administration but open to negotiations on a number of bills. Then there’s Sergio Massa, a moderate Peronist and former presidential candidate who lost several lower house seats in this year’s midterms.

Peronist governors play a very important role, too. In August, Macri said he was willing to negotiate with leaders such as Juan Manuel Urtubey of Salta and Sergio Uñac of San Juan. But now that the elections have passed, governors are facing very different realities.

Urtubey, for instance, saw his presidential hopes go down the drain after losing heavily to Let’s Change in his native province. The same happened to Córdoba Governor Juan Schiaretti, whose Peronist front Unión por Córdoba (Union for Córdoba, UPC) suffered a crushing defeat at the polls. Analysts believe their “soft” opposition line did little to attract voters.

“Voters have punished the ‘Macri-friendly’ Peronists, from Urtubey to (Tierra del Fuego Governor) Rosana Bertone. I don’t think that strategy is the path to renewal,” said Casullo.

“How do you express opposition today in Argentina? Well, first and foremost, you must convince yourself that you’re part of it,” politologists Martín Rodríguez and Pablo Touzon wrote on Monday.

For Zuleta, this is a similar scenario to that seen in 1985, when UCR leader Ricardo Alfonsín — who was elected president two years earlier — obtained a resounding victory in the midterms. “Back then, the results led some people to believe it was the beginning of a new historical movement (led by non-Peronists),” said the pollster. “The opposition, however, was experiencing a silent, internal revolution and in 1987 emerged as a ‘renewed’ [form of] Peronism, putting an end to the wishes of those who thought Peronism was over.”

In 1989, Alfonsín resigned amid hyperinflation and Peronist Carlos Menem was elected president, serving through to 1999.

The protagonists in the years to come will be governors, mayors and political leaders under 50 years old, Zuleta believes. “None of those new leaders have ruled out reaching agreements with the national government. Their ideas about what needs to be done in the country don’t differ that much to those at Casa Rosada,” he added. (Unlike Rodríguez and Touzon, Zuleta seems to believe that there is future in moderation.) Does this mean Peronism has a future, in a world without Fernández de Kirchner?

On Tuesday, Uñac hosted a meeting with Tucumán Governor Juan Manzur. Both provincial leaders were among the few Peronist leaders who won their districts in the midterms and they used the photo-op to send a clear message to fellow party members: we want to lead the renewal of the Peronist Party.

“Cristina (Fernández de Kirchner) has formed a new party (i.e., Unidad Ciudadana), and Peronism should renew itself from the inside out, not as an appendix,” sources close to the governors told reporters, after the leaders shared a lunch of empanadas and wine in the Cuyo region.

A day later, lawmakers aligned with Uñac voted in favour  of stripping the congressional immunity of former Kirchnerite minister Julio De Vido, a decision that effectively sent the 67-year-old to prison.

At this point, Fernández de Kirchner’s figure still remains a challenge: measured in votes, she is the de facto leader of the opposition, but her negative public image is likely to ruin her chances of winning the next elections.

“What we will see at the end of this discussion is a different Peronism, with little or no regard for the insistent calls for ‘unity,’” Zuleta said. “There will be no clear, unifying leadership — but that’s not something we would expect, either.”

Casullo remains pessimistic about the possibilities ahead for Peronists to solve this issue in the near future.

"Even if Fernández de Kirchner did not exist, I still don’t think all the other leaders will be able to put aside their personal ambitions and join forces in less than a year” before the unofficial start of the next presidential campaign, she said. “Except maybe for a case of an economic crisis, I believe Let’s Change has an open road ahead of it for 2019.” 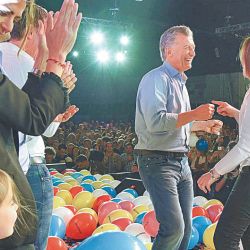 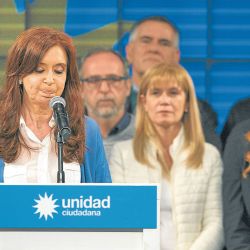 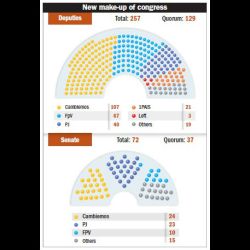