President Mauricio Macri paid tribute to the victims of the bike-path truck attack in New York City this afternoon, as the bodies of the slain Argentines were flown back to Rosario.

The president, who left for New York on an American Airlines commercial flight on Sunday night with his wife, Juliana Awada, shared pictures of his trip in business class on a commercial flight via social media.

After arrival, Macri headed to the Presbyterian hospital, where he met with Matías Marro, one of the survivors of the terror attack. He later attended a remembrance ceremony at the site of the attack, which began at 9am local time.

Five of the eight people killed in the October 31 attack were friends from Argentina celebrating the 30th anniversary of their high school graduation. An Argentine national is also among the 12 people injured, while four other Argentines – all from the same group – survived the attack unscathed.

Sayfullo Saipov, a 29 year-old immigrant from Uzbekistan, is under arrest on terrorism charges for allegedly driving a rented pickup truck down the mile-long stretch of bike path in Manhattan and hitting cyclists along the way.

Speaking at the event, Macri called the attack "cowardly" expressed his solidarity with the US, declaring "terrorism does not distinguish limits, nationalisms or nationalities."

Just a few hours earlier, the remains of the five Argentines killed in the attack had arrived in Buenos Aires, en route to their home town of Rosario for burial.

A military honour guard on horseback raised their arms in salute as the funeral cortège made its way under police escort from the airport to the highway leading to Rosario.

Also aboard the flight from New York were the four Argentine survivors of the attack and relatives of the victims.

In a statement, relatives of the victims pleaded for "love to overcome hatred, and for life to prevail over death."

Marro, the remaining friend in the group, will remain in hospital for the coming days.

'What has the world become?'

Speaking at an event last Friday, four of the Argentine survivors of the attack expressed their pain at seeing their friends killed before their own eyes.

Banchini, speaking for the group in Spanish, read an emotional statement that brought tears to the eyes of consulate officials.

"Friendship has a profound significance for Argentines,” Banchini said. "We were brought here because of a friendship that was born when we were young, and that always accompanied us. We will forever mourn our friends. Love brought us here, and love will continue to unite us."

The four survivors hugged after Banchini read the statement, and applause erupted in the room. Deputy Consul General Eduardo Almirantearena had tears in his eyes.

"What has the world become? How could someone think, plan and execute a plan like this? We can't get our heads around it," Banchini said.

He called for love "ruling over hate and life prevailing over death."

"We have to return home now. We have to accompany the inconsolable families of our friends," he said. "Let us go with our pain to our homes."

Speaking to Clarín after his arrival, the president declared that "Argentina is the best opportunity investors will find."

According to reports, the president will meet with "entrepreneurs and executives,” including Andrew Liveris, director of the Dow Chemical, and Elaine D. Freeney, vice-president for global infrastructure and expansion at Amazon.

The president will stay at the exclusive luxury five-star hotel The Mark, on the Upper East Side in Manhattan, just metres from the Central Park.

He returns to Buenos Aires on Wednesday. 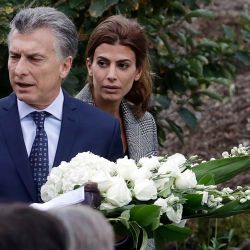 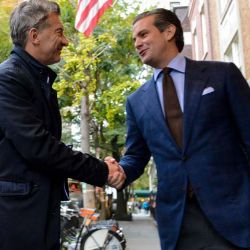