A British Navy ship docked in Buenos Aires this morning for a three-day visit, the latest illustration of improved bilateral relations between the Argentine and British governments.

The visit of the HMS Protector, a scientific vessel built in Norway in 2001, is particularly notable as it was the first foreign ship to join the Argentine Navy’s desperate hunt for the ARA San Juan submarine, which disappeared in November last year.

The Protector's visit to the Argentine capital will be “focused on scientific exploration and logistic cooperation with Argentina in Antarctica,” British officials said in a press release. The two nations, who have worked in tow to dramatically improve bilateral relations since President Mauricio Macri assumed office in December 2015, have supported each other’s scientists in Antarctica for years.

During the vessel's brief stay in the Argentine capital, the crew of the Protector will hold meetings and presentations with their counterparts in the Argentine Navy, as well as hosting officials from the Defence Ministry and Foreign Ministry. Students from a local school, the 'Instituto fundador Don Francisco de Merlo,' will also be welcomed onboard for a tour of the ship and its facilities and a talk.

Prior to the vessel’s arrival at around 9am this morning local time, the ship’s Twitter account posted that it was “a real honour to lead @hmsprotector into this fabulous port for the first time.” British Ambassador Mark Kent also welcomed the vessel's arrival on the social network, saying how he had visited the ship with British officials and Argentine officials from the Foreign Ministry and Argentine Navy.

The HMS Protector is currently on a five-year deployment in the South Atlantic and Antarctic, where its crew has carried out hydrographic studies of the area to improve the safety of navigation, assist the international scientific community of the region and provides support to UK and international research stations in Antarctica.

"It is an honour for us to have been invited and our desire is to share our work experiences in Antarctica with the Argentine naval and scientific community,” the ship’s Captain Matthew Syrett said, speaking prior to the visit.

A year full of opportunities 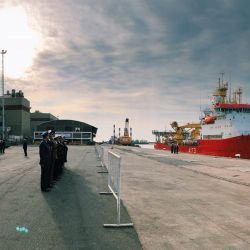 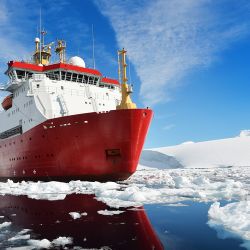