Thousands of people celebrated Argentina's progress in LGBTQ and women's rights groups on Saturday, with hours of music and marches in downtown Buenos Aires marking the 30th annual Pride Parade.

The demonstration had a festive atmosphere, but the head of the state anti-discrimination office, Ornella Infante, told reporters: "We celebrate the victories obtained, but we also demand Congress deal with" trans rights and anti-discrimination bills that have been proposed.

The square in front of Congress and the historic Plaza de Mayo were packed with activists for the 30th incarnation of the pride march, which made a welcome return to the streets after last year's virtual edition due to the Covid-19 pandemic.

People danced in the streets, musicians performed, and people in elaborate costumes held a parade of floats to celebrate a wide range of identities.

"We ask for the law as historical reparation. We have elderly women who have been persecuted. They have not been able to study or access health care," Mary Robles, 60, a leader of the Association of Transsexual and Transgender Transvestites of Argentina (ATTTA), told AFP.

"They are 30 years of struggles, resistance, achievements such as the equal marriage law and gender identity law," said Marcela Romero, another ATTTA leader.

People at the march also carried signs that read "Missing Teruel," referring to Tehuel de la Torre, a 22-year-old trans man who disappeared in March when he left home for a job interview. Marchers demanded more information on his whereabouts.

President Alberto Fernandez hailed the event on Twitter, writing: "The LGBTI+ flag flies all over the country with great cause to celebrate. After so much, a collective that has our commitment to continue working for a more just, free and egalitarian society returns to the streets.”

The government also set up a truck from the Health Ministry to give out Covid-19 vaccines to marchers.

“This November, as every pride month, we march for the rights of all, for the struggles of LGBTI+ movements and for the richness and strength of our diversity,” said Women, Gender and Diversity Minister Elizabeth Gómez Alcorta.

Argentina has recorded 5.2 million cases of the coronavirus with more than 116,000 deaths.

Of its 45 million people, 35 million have received at least one vaccine, and 26 million are fully vaccinated. 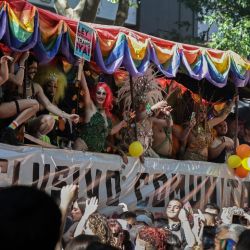 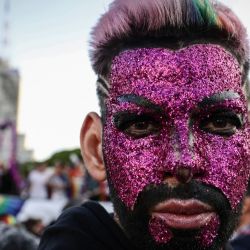 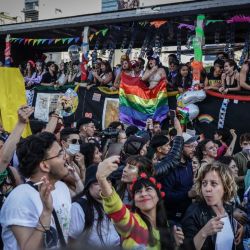 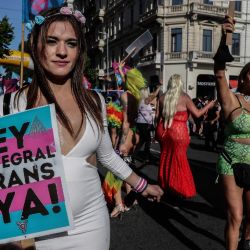 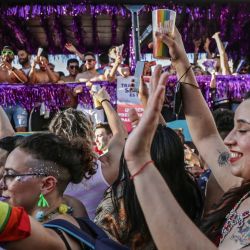