Only a few days before the celebration of the International Day for the Elimination of Violence against Women, this coming November 25, an alarming survey has revealed that 895 femicides were committed in Argentina over the last three years.

"Every 29 hours a woman is killed in the country,” said Raquel Vivanco, president of the Observatorio Ahora Que Sí Nos Ven.

A peak of 322 cases were registered in 2016, followed by 298 in 2017 and 260 in 2018 (data until November), according to the report. Lower numbers, however, don’t necessarily represent a decline in the rate of violence, but rather a substantial lack of coverage from the media, the report's authors say.

Among the perpetrators, 82 percent were part of the victim’s 'inner circle': 42 percent of them were partners, 20 percent ex-partners and 14 percent relatives.

Seventeen percent of the women who were murdered within the last three years had filed a complaint against their aggressor and 11 percent had received judicial protection. Forty-one percent were between 21 and 40 years old, 25 percent between 41 and 60, 13 percent older than 60, and 10 percent between 16 and 20, the Observatorio reported.

“Three years into Mauricio Macri's presidency we are still waiting for the country to adopt public policies aimed at eradicating violence against women," Vivanco said. 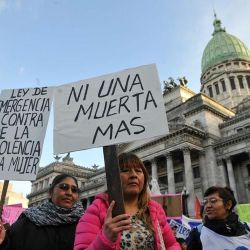 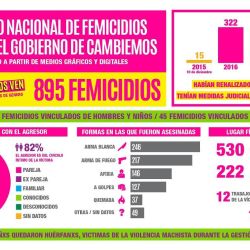