The claim relates to the leaking of a video in which Vidal’s former labour minister, Marcelo Villegas, can be observed affirming to businessmen: "If I could have a Gestapo, a shock force to finish off all the trade unions, I’d go ahead."

According to official sources, the charges were lodged at Federal Criminal and Correctional Court No. 3 in La Plata, a court under judge Ernesto Kreplak.

As detailed by Caamaño, the meeting was attended by Villegas, his Infrastructure colleague Roberto Gigante then Justice undersecretary Adrián Grassi, provincial senator Juan Pablo Allan, La Plata Mayor Julio Garro and five businessmen from the construction sector. The words were pronounced at a meeting at the Bapro provincial bank in La Plata and the videos recording the encounter form part of the denunciation presented by Caamaño to the La Plata federal courtroom.

In the audio of t he video, Vidal’s Labour minister can be heard to say: "Believe me, if I had a Gestapo– and I’m going to deny I ever said this – a shock force to finish off all the trade unions, I would go ahead."

At the meeting, the officials go on to guarantee businessmen a strategy co-ordinated with the Judiciary and underwritten by the national and provincial governments to push an investigation leading to the trial of various trade unionists in the construction sector.

The meeting was also attended by Marcelo Jaworski, the director-general of Copetro; Fabián Cusini, a leading figure in the construction and real estate sector and president of Agrineco; Fernando Sacrachi, the Director of ACIP; Guillermo Moretto, President of the Association of La Plata Architects and six other people who could not be identified. To them the then Labour minister explained that his plan was not only directed against trade unions but also workers in the public sector.

Jewish community organisations, national officials and political and labour leaders repudiated Villegas’ comments. Critical voices also arose from colleagues in the Juntos por el Cambio opposition coalition, with national deputy Waldo Wolff tweeting: “I repudiate the use of the term Gestapo for banal issues, as always, no matter where it comes from.”

Following the backlash, in a brief exchange with Infobae, the official offered “sincere apologies for having clumsily used absolutely the wrong word, which is also far removed from my way of feeling, thinking and acting.”

Villegas also questioned the content of the leaked images: “I deplore that even in a full democracy this kind of illegal wire-tapping is used which can also be doctored.”

Border Guards last Wednesday raided La Plata City Hall in the framework of the case investigating whether there was coordination between ex-officials of the Vidal administration, AFI intelligence agents and businessmen to fabricate court cases against trade union leaders, court sources reported.

The move was ordered by Judge Kreplak, who ordered six other raids and two presentation orders in properties linked to persons appearing in the video found by AFI which gave rise to the court investigation.

Vice-President Cristina Fernández de Kirchner also commented on the scandal via social networks in a series of posts entitled "Father Christmas, the Gestapo and the myth of the self-employed" last Tuesday (also commenting that the day was ‘Día de los Inocentes’or the Argentine equivalent of April Fool’s Day).

The Civic Coalition (CC), headed by Elisa Carrió, a co-founder of Juntos por el Cambio, ratified its intention of eliminating AFI (formerly known as SIDE), after the government denounced Vidal’s ex-officials for mounting a court case against Juan Pablo “el Pata” Medina, former leader of the La Plata branch of the Uocra construction workers union.

“For the CC, the only effective measure to combat the murky world of illegal espionage is to eliminate it, creating in its place an organism which merely co-ordinates the security forces, especially in the prevention and fighting of drug-trafficking, terrorism and organised crime in general,” pointed out the party chaired by Maximiliano Ferraro via a press communiqué.

WHAT ELSE VILLEGAS SAYS IN THE VIDEO

– "Laws are laws, I need to amend Law 10.430, taking away job tenure from provincial employees, something that a grandchild of mine might live to see in 100 years’ time," preached Villegas.

– According to the presentation of the charges, to which the press had access, in another extract of the statements observed in the video, ex-minister Villegas is heard to affirm: "...The scheme is as follows, we need to set up a series of elements to push a court case, whether driven from standpoints within or beyond the labour world,on the basis of threats and violent language to which around 10 persons can bear witness and we are working on them."

– "The presentations which you make to us as institutions will give volume to a court instance on the basis of which the prosecutor, with all the support of the attorney-general, can take measures to add more volume and afterwards approve those measures. We have checked up with the attorney-general, the prosecutor and the judge so it’s going to work…," said Villegas, rounding out his idea. 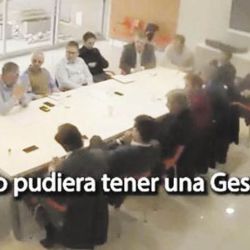 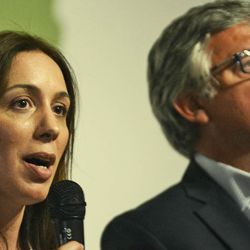